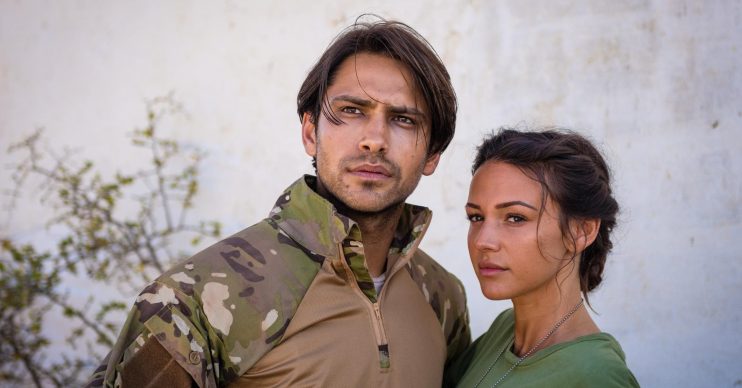 Actress Michelle Keegan has revealed what fans can expect from the new series of Our Girl, which starts on BBC One tonight.

Speaking to Holly Willoughby and Phillip Schofield on This Morning on Tuesday, March 24, she said her character is still struggling to come to terms with the death of her fiancé Elvis.

Michelle said: “So Georgie is back and training a new batch of medics. There’s an underlying sense of grief for Elvis that we’ll see earlier in the series.

“Last season ended on a cliff-hanger and the thing is you don’t know who survives, it’s down the line, she’s got a promotion…

“They get back to Afghan and she’s conflicted about whether to go or not.”

At the end of the last series, Georgie and the rest of 2 Section were being hunted down by armed gunmen before coming to the edge of a cliff.

Moments before the series ended, Captain James ordered them all to jump or risk being shot – and that’s where it ended.

But Captain James – who Georgie enjoyed a romance with is not in the new series.

“Unfortunately he’s not back this season,” Michelle explained.

“I think with Georgie she’s married to her job in a sense she puts her job first. She’s trying to get over the death of Elvis and she needs closure with that.”

Fans of Luke Pasqualino, who played Elvis, will be happy to know he’s back this series, appearing in a series of flashbacks that Georgie has.

At the press launch of the show, the creator of Our Girl, Tony Grounds explained: “Georgie is still missing the love of her life.

“She hasn’t come to terms with this – whether you’d call it PTSD, or just a sort of deep sadness that she’s got.”

Read more: What time does Our Girl start tonight and how did the series end?

He also revealed that they had no choice but to kill off Elvis.

Tony said: “We could have sent [Elvis] to prison or on holiday or just not seen him for five years but that seemed a bit daft.

“So we thought let’s take this brave way – and he dies on the battlefield in Georgie Lane’s arms.

“We were forced into that way of thinking because I love him and I would happily have had Elvis in forever.”

Will you be watching Our Girl tonight? Visit our Facebook Page @EntertainmentDailyFix and let us know what you think of this story.