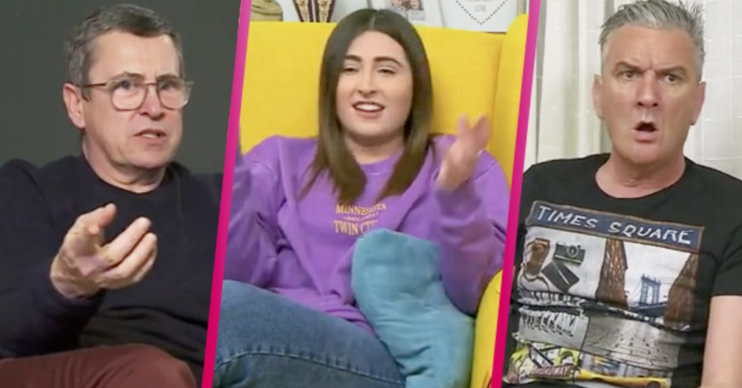 Fans of the couple were unimpressed by the comments

Gogglebox viewers have complained to Ofcom about the show’s coverage of the Prince Harry and Meghan Markle Oprah interview.

Stephen Webb made a joke about Meghan getting a job on EastEnders, while Sophie Sandiford quipped she could work in the palace gift shop.

And the comments didn’t go down too well with fans of the couple.

What did the Gogglebox stars say about Harry and Meghan?

The stars of Gogglebox made several comments as they watched the Oprah interview.

Reacting to claims the royals wanted Meghan to go back to acting, Sophie said: “Stick her in the gift shop while you’re at it. You know, 30 hours a week in the gift shop – that should cover her funds.”

He said: “What did they want her to do? Get her a part in EastEnders?”

Jenny Newby and Lee Riley also waded into the argument when Meghan said she felt “trapped” and likened it to how everyone has been feeling during lockdown.

What did they want her to do? Get her a part in EastEnders?

Jenny added: “We’re stuck in here love, you want to try it in here with us.”

The Siddiqui family also commented on the duchess’s claims she went into the family “naively”.

Mica Ven added: “She thought it was a couple of postcards she might have to be on the front of going like that [waving].”

While some laughed along with the Gogglebox stars as it aired, others were less than impressed to the point that they decided to complain.

Some 51 complaints were made to Ofcom, although this was dwarfed by the 4,398 complaints about the interview itself – and 57,121 over Piers Morgan’s comments on it.

What has Ofcom said about the Meghan and Harry complaints?

A spokesperson confirmed the complaints had been made.

They revealed: “We are assessing the complaints against our broadcasting rules, but are yet to decide whether or not to investigate.

“The complaints were about comments made about the Royal Family from participants whilst watching Oprah with Meghan and Harry.”

Head to our Facebook page @EntertainmentDailyFix and tell us what you thought of the show last week.