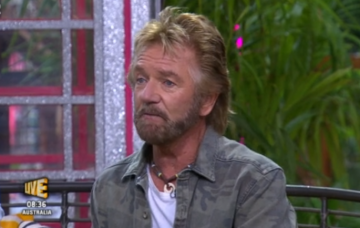 He poked fun at his co-star

I’m A Celebrity’s Nick Knowles caused quite a stir when he debuted his red budgie smugglers in the jungle, and now his co-star Noel Edmonds has taken a big swipe at his manhood!

Deal or No Deal star Noel, who was the first celeb to be voted out, had a cheeky dig at Nick during Extra Camp’s Jungle Awards 2018 segment on Thursday night.

Host Scarlett Moffatt announced that Nick’s, now infamous, speedos had made the ‘Best Dressed’ category along with Noel’s Emperor costume.

But when she asked Noel what he thought, he quipped: “Well, I am overwhelmed – and I feel sorry for Nick because clearly the budgie has died.”

Apologising to the nation for his skimpy pants, DIY SOS presenter Nick, 56, said on This Morning on Friday: “Can I publicly apologise for the red budgie smugglers. It was literally all I had to wear!”

He often wore the minuscule pants around camp.

He recently insisted on stripping off to fetch water, because he kept getting his clothes “wet”, and gave the smugglers another airing!

Noel, 69, was said to have beef with Nick, who was evicted last night, when they were living in the jungle.

He appeared to have a pop at Nick on an earlier episode of Extra Camp, when he said of the rumoured tension between them: “I do have a problem sometimes with rules and regulations. There was no needle, maybe just a little [expletive].”

Noel denied they have issues in a recent interview with The Mirror, but he did admit he has been “winding Nick up because he has such a high opinion of his opinions”.

He said: “I was winding Nick up because he has such a high opinion of his opinions. The others were cracking up and it was a joke. It’s a shame Nick couldn’t see through my mischief.”

And in a video message, the former Noel’s House Party host joked the debate could be settled by his Crinkley Bottom friend.

“Well, I didn’t get in any arguments. The best one to date is apparently Nick and I had an argument about the evolution of man,” Noel said, speaking from the Palazzo Versace hotel down under.

“Well, he was talking about our progression, but I never got to point out that we have all evolved from Mr Blobby.”

While we think Noel’s jibe was a bit mean, we are relieved to have a break from Nick’s tight trunks on our screen!

Do you think Noel went too far? Leave us a comment on our Facebook page @EntertainmentDailyFix and let us know what you think!