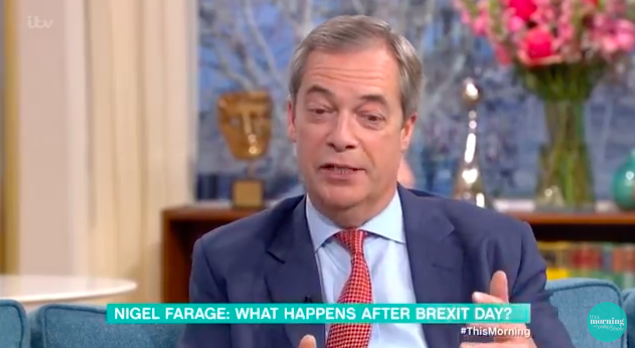 Nigel Farage wouldn’t rule out going on I’m A Celebrity… Get Me Out Of Here!

However he did say no to going on Dancing On Ice

Nigel Farage won’t rule out an appearance on I’m A Celebrity… Get Me Out Of Here!.

The Brexit Party leader has claimed ITV bosses have sounded him out for the jungle in the past, but he was too busy to consider it at the time.

Read More: Viewers call for Piers Morgan to be sacked from GMB after he ‘mocked’ the Chinese language

Appearing on This Morning on Wednesday (22.01.20), host Phillip Schofield asked if he’d consider the reality show and Nigel replied: “I don’t know.”

He added that while producers “have been after” him, he wasn’t temped “because the Brexit thing wasn’t done” yet.

I’d be on every bloomin’ trial there is

However, the 55-year-old politician admitted if he did agree to join the camp, viewers would likely put him forward for plenty of Bushtucker Trials.

He laughed: “I’d be on every bloomin’ trial there is … the problem with having an opinion is, while some people love you, a lot don’t.”

Nigel – who will finish as an MEP when Britain leaves the EU on January 31 – also refused to comment on the idea he could try his hand at ‘Strictly Come Dancing’ in the future.

BREAKING Leave Means Leave have been given approval to hold an event in Parliament Square on 31st January. Great news! It is a big moment in the history of this nation to celebrate. Register now at brexitcelebration.com

Nigel was firmer when it came to Dancing On Ice, as he played down the suggestion he could join ITV’s figure skating competition.

He replied: “No, I’m absolutely not doing that.

Nigel also opened up on his life before politics, describing himself as “quite normal”.

Another day campaigning. Back to London tomorrow for some admin, and then we go again!

He said: “I was once quite normal, I had a business, a young family, I got involved in politics, this was my cause.

“I felt the European thing was going wrong, I felt it was a different thing what mum and dad voted for all those years ago

“So I’m going to spend a bit of time after February reflecting, a big chapter of my life is over, I’ll take my time.”