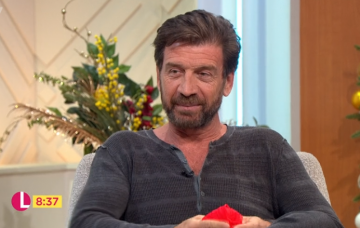 He was in a lot of pain

Behind Nick Knowles’ tough exterior on I’m A Celebrity, he was struggling with pain from a shoulder injury.

The DIY SOS star injured himself just days before he was due to fly to Australia and had to have an MRI scan to check he was in good enough condition for the show.

The 56-year-old said on Lorraine on Thursday: “About five days before I went in I compressed a couple of vertebrae in my neck and tore two ligaments in my shoulder.”

He added: “I was in an MRI machine just two days before I went out and when I got to Australia I had four cortisone injections in my shoulder.”

The presenter said medic Dr Bob would also regularly check on how he was doing off camera and that he was often in the freezing jungle pool to help ease the discomfort.

The star was adamant that he didn’t want his fellow campmates to know about his struggle.

He added: “I didn’t say anything because I didn’t want the sympathy vote – I just wanted to do it, and get on with it, and come out the other side.

“But that’s why I used to sit in that freezing cold pool, to freeze my shoulder.

“I hate cold water as well but it would go numb and I would get about an hour’s relief from it.”

He also revealed his injury is why he struggled to exercise correctly after his push ups were mocked by viewers and host Dec Donnelly.

Nick explained: “It’s nerve damage and Bob said you can either attack it or give up. If you look, I can’t go up on my left arm, which gave me a strange humping motion.

“So that was a little bit embarrassing.”

Nick also cracked up Lorraine viewers today when he revealed he would be auctioning his, now infamous, red budgie smugglers for charity!

He explained: “Weirdly, I’ve been asked if people could take it to auction. If anyone would actually bid for it I don’t know, but we’ll put them up for auction so we can make some money and put that towards one of the charities I support.”

Nick became renowned for wearing the tiny trunks around camp – insisting they were more practical because he was always getting wet while doing chores.

But he later apologised to the nation.

Read more: Nick Knowles responds after being accused of fibbing in I’m A Celeb

He said on This Morning last week: “Can I publicly apologise for the red budgie smugglers? They were all I had left to wear.”

Do you think Nick did well considering his injury? Leave us a comment on our Facebook page @EntertainmentDailyFix and let us know what you think.