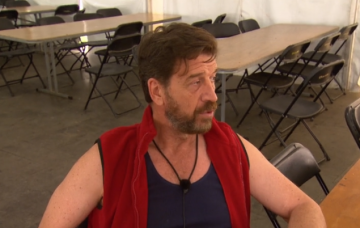 Nick Knowles has hit back at Biffy Clyro’s claims that he bent the truth when he told his campmates he had performed on a rooftop in Soho with the Scottish rockers.

The 56-year-old regaled his campmates with his tale of jamming with Biffy Clyro, but was disappointed to discover that the band had played down his claims, saying while they had met the DIY SOS star eight years ago, there had been no “rocking out” as Nick had claimed.

Nick’s sons broke the news to him as he left the jungle, with Nick sticking to his story that the jamming session had happened.

During I’m A Celebrity… Coming Out on Wednesday night, he said: “I imagine their management has told them to distance themselves from me!”

But Nick did celebrate having his track Make You Feel My Love reach number one on the UK iTunes chart.

He said: “It’s hilarious, isn’t it? I played guitar with my brother and never really took it seriously, it was just something we did as a family. Occasionally, I’d find myself on the rooftop of a hotel.”

It comes after Biffy Clyro’s drummer Ben Johnston responded to Nick’s claims they had a jamming session.

Speaking on the Radio 1 Breakfast Show, Ben said: “We came to this hotel in Soho and we’d been informed that Nick Knowles has bought us a bottle of champagne to celebrate on the roof.

“He was lovely, we had a drink and we left and there might have been a guitar there.

“He was a nice guy! I’m not gonna say anything bad about him, Mr Nick Knowles, he was lovely.

“I’m really sorry to shatter the illusion that we had a proper heavy jam with Nick Knowles, because that didn’t happen I’m afraid. It’s a half truth.”

Read more: Harry Redknapp reveals how his wife Sandra really felt when he ran over her leg

In the jungle, Nick had told campmates the gig had earned him his record contract, saying: “Somebody from a record company saw me doing it and I got a phone call saying, ‘I’m from Universal, do you want to do an album?'”

But it’s not all bad news for the presenter’s musical ambitions. His single, a cover of Make Your Feel My Love, hit number one in the iTunes chart after a push from radio DJ Chris Moyles.

But Nick insisted he wouldn’t be embarking on a tour anytime soon, telling The Mirror: “I honestly don’t think anyone needs to suffer an entire gig from me.”

It’s also been revealed that now he’s out of the jungle, Nick plans to head to the US to crack Hollywood.

He told a podcast before entering I’m A Celebrity that he had turned down roles in the past but was hoping to make a film retracing Elvis’s steps.

He added: “I’m working with a studio in the US from January. So maybe mid-year there might be something.”

Who would you go to watch a Nick Knowles gig? Leave us a comment on our Facebook page @EntertainmentDailyFix and let us know what you think!