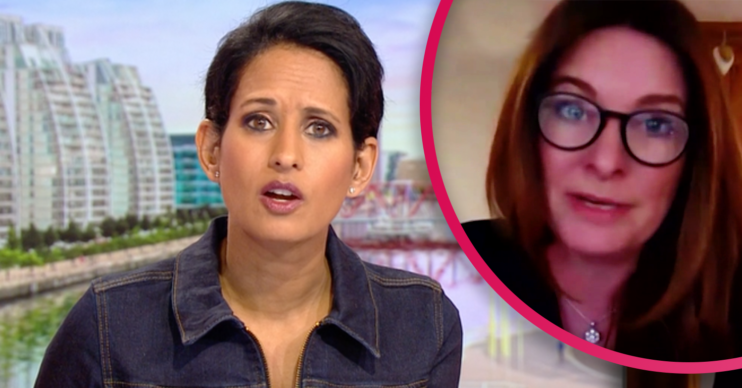 Some said they 'switched off'

BBC Breakfast viewers took to Twitter today (April 1) to voice their displeasure over host Naga Munchetty repeatedly interrupting a guest on the show.

Naga and Charlie Stayt were chatting to the government’s Apprenticeships and Skills Minister Gillian Keegan when the issue arose.

And it even caused some BBC Breakfast viewers to claim they’d “switched off”.

What happened with Naga Munchetty on BBC Breakfast today?

Gillian Keegan appeared on the show to discuss a range of topics, including a new NSPCC helpline launched to support school children.

She was also grilled about Shadow Justice Secretary David Lammy’s comments about the racism he believes was highlighted in a recent government’s report.

Things got a little heated between the ladies when Naga mistakenly believed the minister was levelling criticism at her.

Gillian said: “I think it’s really important not to pit groups against groups. I looked at the report.”

Naga then cut in and said: “I’m sorry I don’t think I was pitting groups against groups I was saying…”

What did viewers say on Twitter about Naga Munchetty?

Some branded Naga “rude” for interrupting.

One viewer stated: “Why is Naga always so rude to everyone? I don’t get it!!”

Another commented: “Here we go again.

Naga is back and interrupting and being rude again… for no reason it appears.

“We have had a lovely week with @mrdanwalker et al. Now Naga is back and interrupting and being rude again… for no reason it appears.”

Read more: MPs demand Naga Munchetty and Charlie Stayt are ‘reprimanded’ for being ‘disrespectful to our Queen’

A third claimed: “Naga always shows her aggressive side when interviewing Government ministers. She just can’t hide her bias. So unprofessional.”

Others said the host’s actions had made them switch the show off.

“How rude is Naga Munchetty to keep butting. Time to switch over!!” said one.

Some viewers were Team Naga, though

However, some viewers did have Naga’s back – and backed her interrupting.

“She’s doing her job. She’s not there to blow smoke and massage the egos of various self serving Tory MPs. You could always switch off,” said one.

“Thanks for advice, but yes I did switch off,” came one quick reply.

“No wonder Naga feels the need to interrupt,” said another backing the host, “Keegan is [bleep] hapless.”

What did you think of today’s BBC Breakfast? Tell us on our Facebook page @EntertainmentDailyFix.