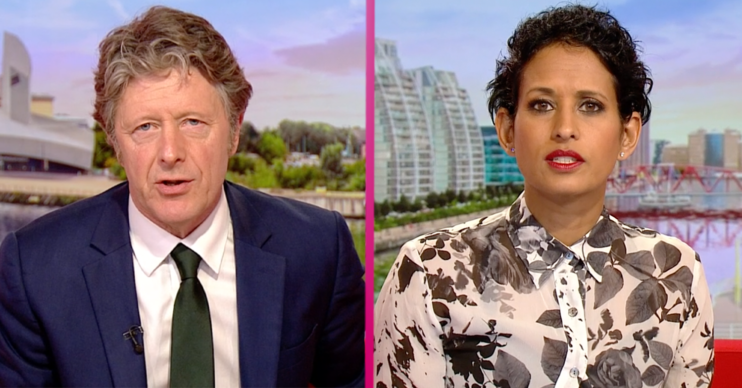 A group of MPs are calling for Charlie Stayt and Naga Munchetty to be “reprimanded” for their behaviour on yesterday’s BBC Breakfast (March 18).

During the show, they interviewed Housing Secretary Robert Jenrick.

And the BBC Breakfast hosts drew complaints from viewers after they noted a giant Union Jack flag and a picture of the Queen in the background.

What did Charlie Stayt and Naga Munchetty say?

Charlie joked: “I think your flag is not up to standard size government interview measurements.

Read more: Naga and Charlie under fire for comments about Robert Jenrick’s flag

She added: “And a picture of the Queen there too, in the Westminster office I presume.”

Now a group of Conservative MPs – led by Brendan Clarke-Smith – have written to director general of the BBC Tim Davie insisting he “reprimands” the hosts.

What did the MPs say in their letter?

The Express reports the letter states what happened during the interview and makes claims of “sniggering” in the background.

Read more: Naga Munchetty apologises after ‘ticking off from bosses’

It also claims that Naga “turned away in a highly dismissive manner” after making her comments about the Westminster office.

We feel that the hosts need reminding that the B in BBC stands for British.

The letter claimed MPs have been “inundated with complaints from constituents” over the segment.

It added: “We feel that the hosts need reminding that the B in BBC stands for British and that the comments and attitudes on display towards both our flag and our Queen were inappropriate and also disrespectful.”

The letter also referenced the pair’s appearance on Saturday Kitchen and the ensuing complaints about their behaviour.

It added: “We therefore feel that the behaviour in this instance was inappropriate and fell below the high standards expected at the BBC.

“We would therefore ask that both Mr Stayt and Ms Munchetty are reprimanded for this behaviour and would ask them to apologise for their conduct.”

I ‘liked’ tweets today that were offensive in nature about the use of the British flag as a backdrop in a government interview this morning.
I have since removed these ‘likes’.
This do not represent the views of me or the BBC.
I apologise for any offence taken.
Naga

What has the BBC said?

Earlier today (March 19), a BBC spokesperson told ED!: “It was a light-hearted, off-the-cuff comment. No offence was intended.”

Naga also took to Twitter to apologise for any “offence” caused after she liked tweets about the segment.

Charlie doesn’t appear to have any social media accounts.