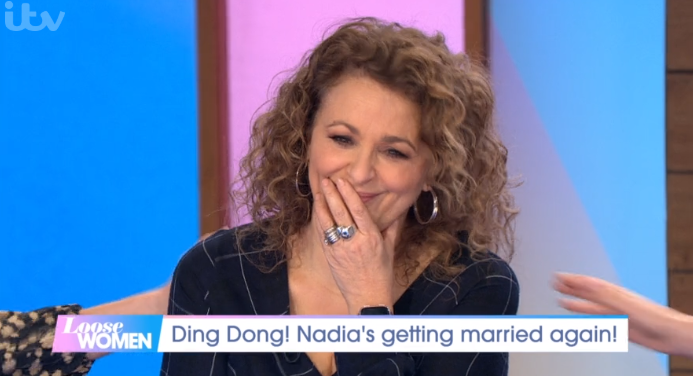 They first married back in 2002

The Loose Women star has been married to Mark for almost 18 years but Nadia wanted the couple to renew their vows in another ceremony.

Speaking on Thursday’s show, Nadia showed the moment she asked Mark to marry her again on a podcast about Valentine’s Day, which was uploaded on their YouTube channel.

She asked Mark: “I would really like to ask you if you would like to renew your vows with me.”

Mark replied: “Aww, you’re a funny one aren’t you,” as he got up to give Nadia a hug.

I would really like to ask you if you would like to renew your vows with me.

Nadia told him that he hadn’t said yes, he joked: “I know, I will have to think about it.

Speaking about the moment on today’s Loose Women, Nadia said: “We got married within six months of meeting each other, it was all very thought.

Silly sod ! But I love him !! We moan a lot about each other but when we are both in a half decent mood there’s no one that i’d rather spend time with BUT when we row , my god we row ! Do you think it’s important to have a good row when in a relationship ? What do you think when people say they’ve never had a single crossed word with their partner ? It’s totally beyond my comprehension . I am in awe😂😂😂😂 Ps kiki took this pic ! Isn’t it lovely !

“We were both workaholics, Mark went back to work two days into the honeymoon and then my mum came on the honeymoon with me so we’ve always wanted to do it [renew our vows].

“A lot of people at our wedding didn’t think we were going to make it.”

Christine Lampard revealed that the show had organised a wedding planner, flowers and a romantic way the proposal could happen but Nadia “ruined it” by proposing to Mark.

Nadia said: “I knew there was something about doing it on the show and the other night we had some friends round and Mark said, ‘oh those people who propose on telly could you think of anything worse?’

“I was like, ‘okay…’ but I just wanted to publicly tell him that he’s such an incredible person. I just wanted to do something that was out-there so I ended up asking him around our kitchen table!”

What would you do if your partner proposed on national TV? 💍

Would you love it? Or hate it?

Nadia’s explaining why she decided NOT to propose to Mark on air with the #LooseWomen. pic.twitter.com/xhZCytlc1v

The show then revealed the moment Nadia asked Mark.

Returning to the studio, Nadia became choked up as she said: “People think we have the worst marriage on the planet because we talk honestly about it but we don’t.”