The couple welcomed their baby girl last month after almost a decade of IVF.

Appearing on Wednesday's edition of Lorraine, Matthew and Amelia showed off their adorable newborn and opened up about becoming parents for the first time. 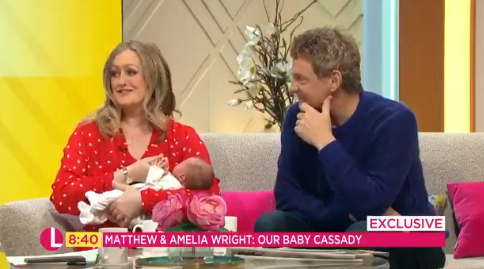 Gushing over her daughter, Amelia: "To finally have her and hold her in my arms after all that time trying, it's like a dream.

Matthew added: "We've just moved on from the tears of joy. I would come [home] and find Amelia holding her weeping tears of joy."

Amelia said: "It's just so emotional to finally have this baby and I don't think anything can prepare you for how much you're going to love your baby. It just hits you." 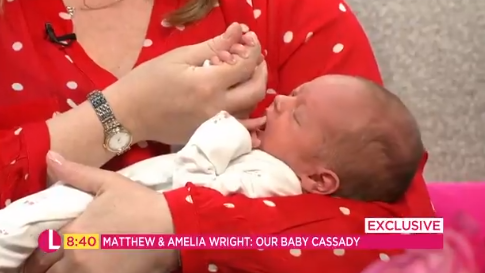 The couple said Cassady is a "good baby" (Credit: ITV)

Matthew admitted he's "still connecting" to his baby daughter and said he and Amelia are in a "bubble".

He said: "It is a bubble at the moment, all you do is eat sleep and baby. It is a journey and a rollercoaster, with some huge lows and some giddy highs.

To finally have her and hold her in my arms after all that time trying, it's like a dream.

"One of the loveliest things, social media…to have the outpouring of love from people."

Talking about Cassady's birth, Matthew said: "I nearly missed it. She was always due to be a Caesarean because of the ectopic Amelia had a long time ago, due tomorrow on Valentine’s Day.

"[But] Amelia started developing some of the signs of preeclampsia, quite swollen fingers."

'To finally have her and hold her in my arms after all that time trying... it's like a dream.'

After eight years of fertility treatment, @Matthew_Wright and @mrsameliawright introduce us to baby Cassady and admit they've been weeping tears of joy since her birth. #Lorraine pic.twitter.com/LOmjqmvbBA

"She phoned me on the Friday lunchtime [from the hospital] and said they are not going to let me out but the baby will probably be on Sunday. I did my radio show and on Friday we have a bit of drinking on air, Gin Friday."

Amelia added: "I said, ‘Drink what you want it’s not going to happen.'"

Matthew continued: "I get in the cab to go home and the text is 'we are having the baby now'.

"Through the traffic, heavy traffic jams, I put on the fancy dress outfit with the funny hat and everything [the hospital gown and hat], straight through man with a big needle. On we go! Twenty minutes later I’m cutting the chord for little Cassady."

She said: "I’m bouncing back, feeling good. You fall in love again, with your baby, with your husband, with your life. She’s perfect."

Speaking about their daughter's name, Matthew explained: "I’m the ‘namer’, Cassady is after Neal Cassady the muse of the beat writers of the 1950s… a character who made everyone feel good about themselves. That’s a nice sentiment."

Amelia: "It’s the Irish spelling, my mother is Irish."

Last month, Matthew announced the arrival of his little girl.

Just a couple of hours before she was born, he wrote on Twitter: "Just received the following: 'Ok we are having a baby this evening or basically As soon as you get here.

"'You will be taken to the labour ward and given blue pyjamas to wear. Xx' @mrsameliawright THIS IS HAPPENING!! (sic)"

How did you decide your child/children's name? Leave us a comment on our Facebook page @EntertainmentDailyFix and let us know what you think!