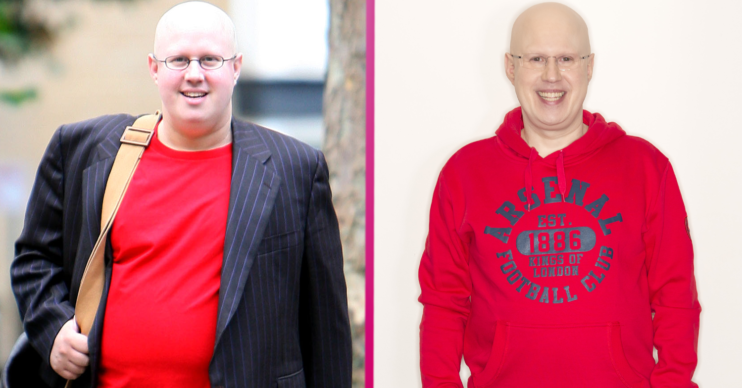 Much like the rest of us, the Great British Bake Off host admitted he had gained weight in lockdown.

And he told Lorraine it got to a stage where he “just had to do something about it”.

What did Matt Lucas say about his weight loss?

Matt opened up about his weight loss after Lorraine asked how he’d managed it seeing as he fronts Channel 4’s Great British Bake Off.

He said: “I lost some weight, I needed to take the edge of, because I put on a lot of weight in lockdown.

“I just had to do something about it,” he added.

Read more: Bake Off fans call Matt Lucas ‘cute’ as he grows a moustache for the very first time

Matt, who has alopecia, didn’t reveal how much he’d lost or what he weighed.

“No, but then you would look daft if you were,” retorted Lorraine.

How did Matt lose the weight?

Speaking on Lorraine previously, Matt revealed his plans to get fit.

“The one thing I need to do is get fitter,” he said. “I have put on a little bit of weight, that’s my next challenge to do a bit more exercise.

Read more: Lorraine Kelly hits back at troll as fans rally round and brand him a ‘liar’

“I might have to make a game of it when I go out an exercise to stay out of people’s way. I don’t have a garden so I have to find a way to do that.”

However, Matt admitted on Instagram earlier today (May 14) that he does have a secret weapon hidden away at home.

He lives with a personal trainer!

Sharing a video of the PT at work, Matt revealed: “My housemate Jamie is a personal trainer extraordinaire.”

So has he been helping the Little Britain star in his bid to shape up?

What’s happening with the next series of Bake Off?

Matt will need some serious willpower to keep the weight off as he told Lorraine they’re about to start filming the 2021 series.

“We’re starting very soon. And like last year we’re going into a bubble.

“All self-isolating and getting tested. And then we’re going into COVID-free bubble, so we can all taste each other’s bakes and there can be handshakes and all sorts.”

The star also gave an insight into this year’s contestants.

“I’ve seen the video clips of all the new bakers and there’s some brilliant ones in there,” he teased.

Head to our Facebook page @EntertainmentDailyFix and let us know what you think of Matt’s weight loss.