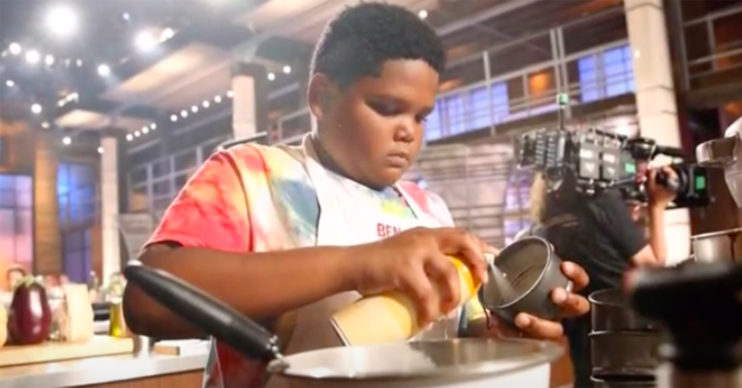 MasterChef Junior star Ben Watkins is battling a rare cancer at the age of just 13.

The heartbreaking news comes just three years after his parents died in a murder-suicide.

Ben has received a diagnosis for Angiomatoid Fibrous Histiocytoma.

The teen began treatment for the rare form of cancer just days after his 13th birthday.

Ben’s family have confirmed that he is undergoing chemotherapy.

According to the Chicago Tribune, his father fatally shot his mother and then himself.

Airing in the US on channel Fox, Gordon Ramsay hosts.

Although Ben didn’t win, he was a favourite with viewers.

However, the campaign has fresh support under the hashtag #Love4Ben.

Read more: Katie Price thanks new boyfriend after breaking both her feet in Turkey

The fund is trying to raise money to cover Ben’s hospital bills and future educational costs.

The GoFundMe campaign page is run by his grandmother and uncle.

This information includes: “Ben is an aspiring chef.

“He opened Big Ben’s Bodacious BBQ and Delicatessen in the Miller Community of Gary, Indiana with his late parents, Leila Edwards and Mike Watkins.

“Young Ben is one of only six people in the entire world with this illness. Ben is currently undergoing treatment at Lurie Children’s Hospital of Chicago.

“Despite all of Ben’s trials and tribulations, he remains positive. He looks forward to getting back in the kitchen and pursuing his dream to become an engineer.”

Finally, the campaign adds: “We want Ben to be able to continue his education in the culinary arts and/or engineering.”

“On behalf of Grandma Donna and Uncle Anthony, thank you for your #Love4Ben!”