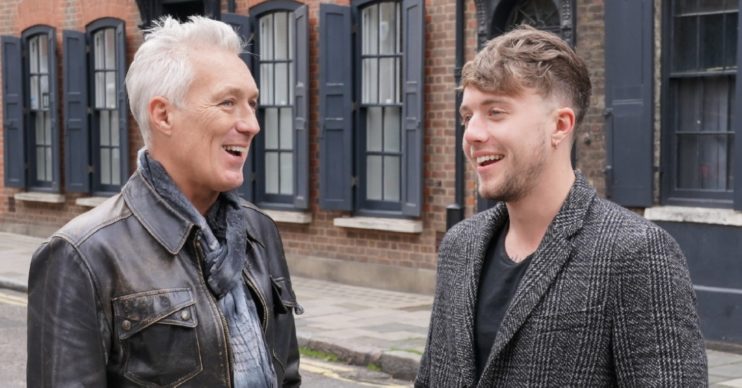 Martin Kemp has insisted he didn’t help son Roman in the early stages of his career.

The 59-year-old former EastEnders star is set to appear on ITV’s DNA Journey with his son, 28, tonight (March 24).

But despite being a hugely successful radio host now, Martin says Roman learnt the hard way.

Speaking to Entertainment Daily, the father and son opened up on their careers, their relationship and what they’ve learnt from their ancestors.

What did Martin Kemp say about his son Roman?

Opening up about his son, Martin shared: “When Roman first started out, I was very aware not to make it look like I was pushing him in any shape or form.

“I didn’t open one single door for him. But now, Roman entertains the nation for four hours on radio every morning.

“He has a right to stand up on his own and he’s great at what he does. It’s a pleasure to work with him.”

As well as DNA Journey, the pair also appear together on Sunday Best.

I didn’t open one single door for him

However, Martin and Roman are yet to get sick of each other.

“Me and Roman can say the truth about each other and sort it out quickly.”

Furthermore, he added: “It’s the same when I work with my brother. Me and Gary have our faults and differences, but at the end of the day, we can sort them out quickly because we’re family.”

Thankfully, Roman feels the same way about his dad.

He told us: “It was always a worry of mine if I started appearing in things with my dad, is that going to define my career?

“When we get asked to do things like DNA or Weekend Best, I can’t wait to show my grandkids what we did.

“I can’t tell you how grateful I am to have that.”

What should viewers expect from DNA Journey?

Roman explained: “I can 100% categorically say that this was the most fun I’ve ever had working with my dad. It didn’t feel like work. The team were so great on taking us on this journey.”

Meanwhile, Martin shared: “Every now and again you have these opportunities that come up that you don’t get in ordinary life.

“You have to be inside that entertainment bubble to get the opportunity and this is one of them.”

Despite a family myth surrounding wife Shirley’s ties to Egyptian royalty, they knew little about their past.

So, what did the father and son learn?

Roman told ED!: “I’ve learnt a lot, specifically my dad’s side of the family. I’ve never been more grateful to be in the situation I’m currently in.

“My dad has always told me the story about how he grew up. It was tough for him and Gary, but this took it to another level. It even shocked him.”

‘The show gave me therapy’

Furthermore, Martin said: “I lost my dad eight years ago and I’ve always found it hard. I’ve always repressed those emotions of losing him and never really letting it out.

“I think this programme gave me therapy almost. I cried for him, I missed him terribly and it all came out in that two-week period.

“It was all the things I’d be repressing for eight years. It wasn’t bad, it was lovely and I felt great the other side of it.”

However, the pair did tease viewers over one particularly special moment.

Martin explained: “There’s a moment when we find my nan’s grave that we didn’t know was there.

“Something happens at the end, but it is the most special moment I’ve ever witness. I’ve never seen anything like it on television.”

In addition, Roman teased: “There’s going to be a lot of people who watch this and go, ‘That was set up.’

“It’s not set up – it was the scariest and creepiest thing. If it’s a coincidence, it’s the best coincidence I’ve seen in TV in a long time.”

DNA Journey airs tonight at 9pm on ITV. To catch up on the series, visit the ITV Hub.