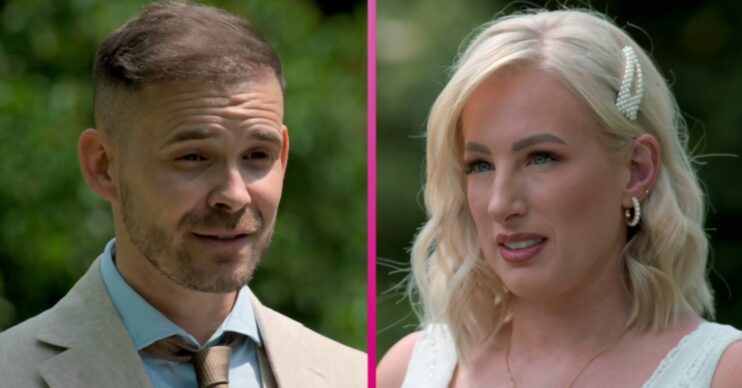 The pair committed to each other last night

After the finale was pushed back due to technical difficulties, the pair finally renewed their vows on E4 last night (October 1).

However, some fans were far from convinced with the outcome.

During the ceremony, Luke admitted that he was scared after being hurt by Morag in the past.

However, he added: “The fact is Morag, my heart belongs to you.

“I may not be the man you wanted when we met as strangers on our wedding day. But you need to know I am the man that you deserve.

Read more: MAFS UK star Morag accidentally let slip she and Luke are no longer together after finale disaster?

“You are an amazing person and the man standing here today will always be your best friend and your biggest support – and I will always bring you tea in bed.”

In her vows, Morag raised her concerns over their romance.

She shared: “During our honeymoon, I began to realise just how polar opposite we were. I was bold, you were timid. I was comfortable in my own skin, and you were self-conscious.

“At that time, I wanted to run, I didn’t think you were the man for me, I signed up for this wanting a ready-made man, not a project.”

But in the end, Morag explained that she wanted Luke in her life.

The Essex girl added: “I want you in my past, present and future. The one thing we don’t do is give up.”

However, the romantic declaration didn’t convince some viewers at home.

On Twitter, one complained: “Luke is an absolute doormat. Does he have any self respect?! Morag has treated him like [bleep] this whole season… at least Bob knew when it was time to get out for his own self respect!”

Another said: “I give Morag and Luke a week max after they leave the show. There is no way they will last.”

#MAFSUK The whole of the UK when we discover in about 10 days that Luke and Morag have decided to split up. pic.twitter.com/3CzjLc3VM3

Luke is such a mugg, he can do so much better than Morag… 🤯🤯 #MAFSUK

The kindest thing Morag could do for Luke woukd be to let him go (I've now seen that might be the case) get out there Luke and find the lady, and the family YOU deserve!We love you!! ❤#MAFSUK

I give Morag and Luke a week max after they leave the show. There is no way they will last. 😬 #MAFSUK

A fourth wrote: “You could see Morag’s face fall when Luke came to end of his vows. She wanted an easy out #MAFSUK.”

Another tweeted: “The kindest thing Morag could do for Luke would be to let him go (I’ve now seen that might be the case) get out there Luke and find the lady, and the family YOU deserve! We love you!”

Luke is an absolute doormat

A sixth fumed: “Luke is such a mug, he can do so much better than Morag.”

However, one appeared to defend the couple.

Commenting on the ceremony, one said: “I thought she actually looked quite happy that his decision matched what hers was going to be.”