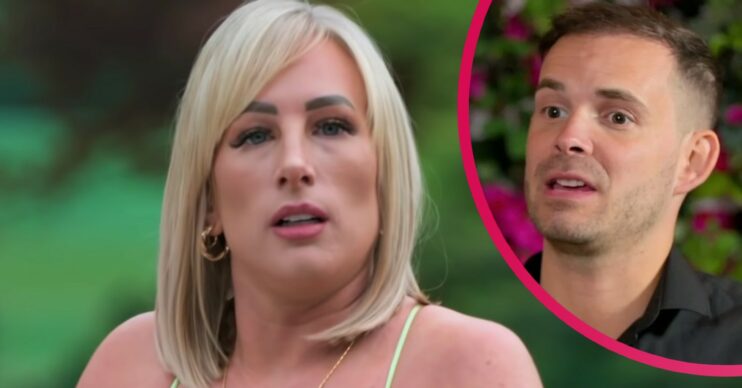 MAFS UK star Morag accidentally let slip she and Luke are no longer together after finale disaster?

Married At First Sight UK fans are convinced Morag Crichton has dropped a huge spoiler about her future with Luke Dawson.

The E4 reality series was hit with technical difficulties last night, as viewers were forced to watch Wednesday’s episode.

Before the drama, Morag took to social media to tease her vow renewal, which didn’t air in the end.

The pair faced some tough moments over the course of the series, as she failed to fall for the firefighter.

And fans were excited to see how their relationship would play out.

Ahead of the finale, Morag took to Instagram to share a snap of herself alongside her co-stars.

She posed for a selfie with Matt Jameson and Dan McKee, while presenter AJ Odudu also appeared.

Morag captioned the shot: “The Grand Finale of Married At First Sight AFTERS!!

“Catch Myself, @matt_d_jameson & @danielmckeee at the top table tonight at 10pm and our fabulous host @ajodudu.”

However, viewers were quick to notice that something was missing.

Many pointed out that Luke didn’t appear in the shot.

Not with Luke then?? There’s a spoiler

Taking to the comments, one said: “Not with Luke then?? There’s a spoiler.”

Another added: “What about Luke???”

A third wrote: “Anyone else noticed Morag’s not wearing a wedding ring…”

A fourth posted: “No ring Morag!”

Another penned: “No spoilers please we can’t watch it! E4 is broken.”

Meanwhile, others complained over the wrong episode airing.

When is the MAFS UK finale?

Thankfully, the finale episode will air on E4 at 9pm tonight.

MAFS Afters will then screen at 10pm.

Following the technical difficulties, the broadcaster released a statement to explain.

So, did this image haunt anybody else's dreams last night? #MAFSUK pic.twitter.com/qK5UQck2Qp

It read: “Following the incident at the weekend, ongoing technical issues have meant that Thursday night’s episode of Married at First Sight UK was a repeat from Wednesday 29th September.

“We apologise to the fans of the show and have worked hard to get the episode to you this evening at 9pm.

“We hope that when you finally watch it you can find out whether Amy & Josh, Tayah & Adam and Morag & Luke renew their vows.”