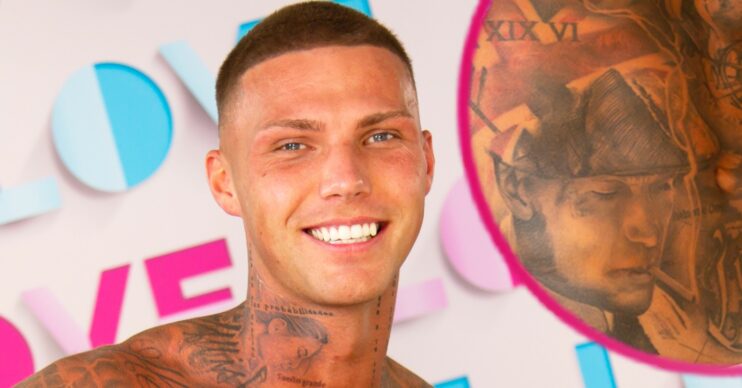 The Islander made his debut on the show last night

Love Island newbie Danny Bibby is set to turn heads in the villa as she show’s latest bombshell.

The 25-year-old heavily inked plumber and clothing brand owner made his debut on the ITV2 dating series last night (July 15).

But what do his tattoos really mean? And when did he first start adding to the collection?

While we’d love to know the meaning behind every one of Danny’s tattoos, we’d probably be here all day.

So, here’s a brief overview.

Starting on his torso, the reality star has a huge compass tattoo on the left side of his body.

There’s also a rose, lighting bolts and a woman’s face.

A rose can also be seen on the right hand side of his torso.

He also has a tattoo of a man in a flat cap, possibly resembling the BBC show Peaky Blinders.

The star, who got his first tattoo back in 2015, previously revealed his chest area took up to 150 hours to complete.

The Spanish quote translates to ‘everything happens for a reason’.

On his back, Danny has chosen a detailed tattoo of Roman emperor, Titus.

What other tattoos does Danny have?

A member of the Flavian dynasty, Titus is best known for completing the Colosseum in Rome.

The new Islander also has portrait of US rapper Post Malone.

Showing off the tattoo on Instagram, Danny called it a personal “favourite” of his collection.

Furthermore, Danny has chosen to pay tribute to boxer Muhammad Ali on his leg.

Other tattoos include Steve Stifler from American Pie, a scene from the Dark Knight and the numbers 1996 – the year he was born.

He also has five slashes across his lower body, explaining: “Key people in my life, 5 slashes for each one of the boys.”

Sadly, Danny has already landed himself in hot water with Love Island viewers.

It comes after ITV2 fans spotted he had used the n-word on social media in 2019.

Danny’s dad has since responded to the backlash and insisted that his son doesn’t “have a racist bone in his body”.

He said in a statement: “Danny does not have a racist bone in his body and there were no racist intentions to this post. Although it was not done maliciously, it was a mistake.

Danny later followed up with his own apology.

He said, via ITV: “I’d like to take the time to apologise to anyone that may have taken offence to my inappropriate remark. I never meant anything malicious by this comment at all.

“I am not a racist person and it’s unacceptable language and ignorant.

“I meant no offence and feel like I have really learnt from my mistakes and will never use that word again.”

Insisting he is “a kind, loving person”, Danny added: “Hopefully you get to see that in the show.”