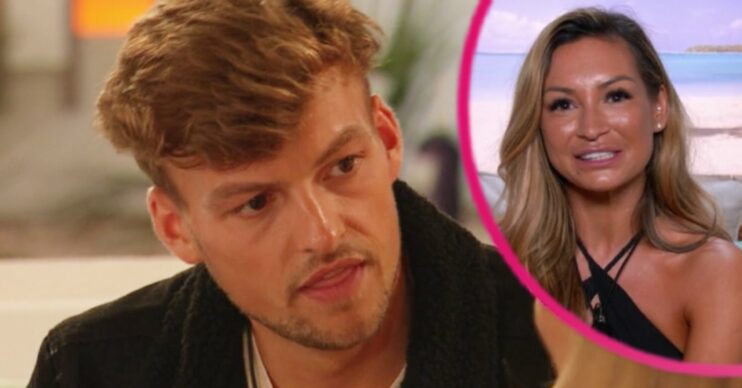 Has Hugo finally found love in the villa?

The 28-year-old hair extension technician turned heads after she entered the villa as the latest bombshell this week.

But during last night’s show (July 15), AJ appeared to set her sights firmly on Hugo, 24.

AJ makes a move on Hugo

On Thursday’s edition of the ITV2 show, viewers watched on as AJ got to know the villa men.

The newbie, whose name is Andrea-Jane Bunker, pulled Hugo for a chat next to the pool.

Later on in the evening, AJ and Hugo went for a private chat on the terrace, where they appeared to hit it off.

She later said: “Hugo, he was one of my top guys. I feel so comfortable around him and he makes me feel good.

“I don’t understand how he’s not coupled up.”

However, Love Island viewers believe AJ is playing a game.

Taking to Twitter, one wrote: “AJ is grafting Hugo because he’s a safe bet, you can see it in her face she’s not interested.”

A second added: “AJ is not interested in Hugo one bit. She just knows how popular he is. It’s lovely Dr Alex all over again. So annoying when they use them. #LoveIsland.”

AJ is grafting Hugo because he’s a safe bet

Another complained: “I think AJ’s nice but I hope she’s not forcing it with Hugo, knowing the public love him, like Demi did with Naz.”

A fourth said: “Am I the only one suspicious of AJ liking Hugo?”

In addition, a fifth tweeted: “It’s great to see Hugo getting some attention #LoveIsland but I have to agree with Jake, I think AJ really wants a bit of Teddy.”

AJ is grafting Hugo because he's a safe bet, you can see it in her face she's not interested #LoveIsland #LoveIslandUK

Meanwhile, others believe the potential new couple are well suited.

One shared: “Hugo is actually so natural with AJ this is the first time he’s not overcompensated or tried to act different with a gal to graft #LoveIsland.”

Read more: OPINION: Is it love or money for the contestants of Love Island 2021?

Earlier this week, fans were concerned after Sharon made a move on Hugo.

The Islanders were previously paired together at the beginning of the series, but failed to hit it off.

However, Sharon admitted to having a change of heart over the teacher on Tuesday’s show.