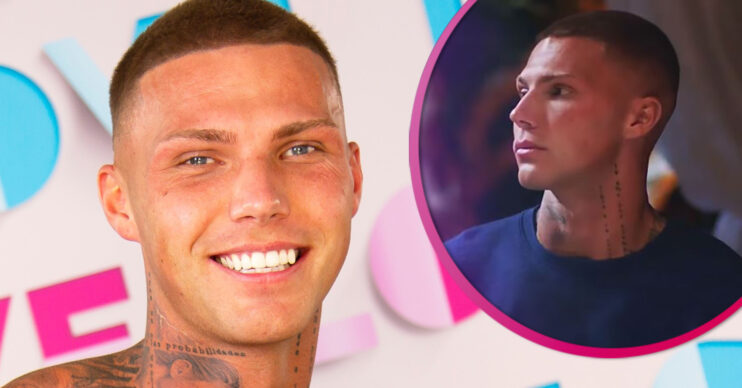 Danny will enter the villa on tonight's show

The dad of Love Island newcomer Danny Bibby has apologised on behalf of his son after fans unearthed a racial slur on his Instagram.

Danny, who made his debut on the show last night, has come under fire after ITV2 fans spotted he had used the n-word on social media in 2019.

Fans of the reality show have called for ITV to remove him from the villa.

Now, his father has responded to the backlash and insisted that Danny doesn’t “have a racist bone in his body”.

Danny’s dad said in a statement: “Danny does not have a racist bone in his body and there were no racist intentions to this post. Although it was not done maliciously, it was a mistake.

It comes as viewers have called for Danny to leave the Love Island villa.

One person said on Twitter: “Please get Danny out of that villa #LoveIsland. @LoveIsland it’s about time to put your foot down.”

Another wrote: “I’m sorry but how is this Danny boy allowed in the villa after using racial slurs?”

A third added: “@LoveIsland are we going to see this Danny or is he being booted for his racial remarks?!”

Others have threatened to boycott the programme.

One tweeted: “Seriously we all need to just stop watching @LoveIsland until they remove that Danny.”

Another said: “I’m not watching until he is respectfully removed.”

Danny entered the villa at the end of last night’s show and chose Kaz to go on a date with.

Meanwhile, Danny has said he ‘speaks his mind’ and has ‘no filter’.

When asked whether he’s looking for “fun or a relationship”, Danny says: “Bit of both, really.

“You never know what’s around the corner. Hopefully someone can sweep me off my feet.”

He also says he could be the “alpha male” in the group of boys.

Read more: Love Island: Brad dumped from the villa and fans are all saying the same thing

Danny adds: “The girls have Faye who says it how it is but the lads are all like little sheep.

“There is no way I would have sat back and let Hugo cry.”

Danny himself has now issued an apology through ITV.

He said: “I’d like to take the time to apologise to anyone that may have taken offence to my inappropriate remark. I never meant anything malicious by this comment at all.

“I am not a racist person and it’s unacceptable language and ignorant.

“I meant no offence and feel like I have really learnt from my mistakes and will never use that word again.”

Insisting he is “a kind, loving person”, Danny added: “Hopefully you get to see that in the show.”