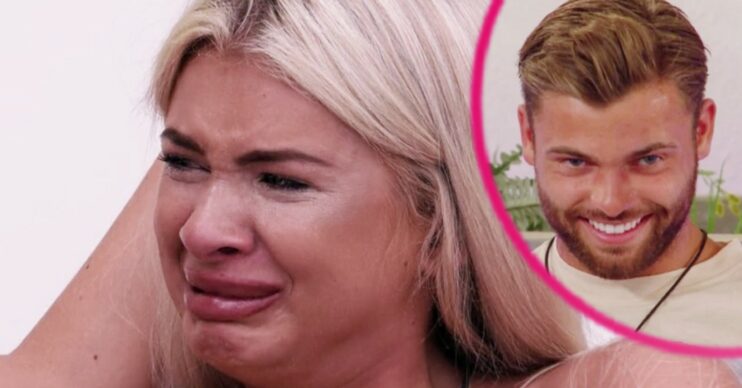 They've had their fair share of troubles in recent weeks

Love Island couple Liberty and Jake initially hit it off during the show’s first coupling.

However, the pair appear to be at breaking point just days before the final following a rocky few weeks.

But is it about time that Liberty dumps her boyfriend for good?

During the game, Jake was seen confessing that he didn’t want to ‘rip Liberty’s clothes off.’

She also doubted his intentions when he confessed he loved her.

Last week, fans became suspicious of Jake’s behaviour after he held Liberty back from hugging her best friend.

The strange scene followed after Tyler asked Kaz to be exclusive.

Attempting to explain his bizarre behaviour, he said: “She’ll come down and give you a cuddle. You don’t want to be up there with everyone, do you know what I mean? That’s your best mate!”

3. Showing interest in other girls

Despite being coupled up with the Birmingham lass, Jake hasn’t been afraid to voice his ‘type’ in front of Liberty.

He previously admitted that he was attracted to Millie and Chloe.

And during last night’s show, he openly called Millie “sexy” as she took part in the baby challenge. Rude!

The water engineer regularly uses the girlfriend card during awkward chats with Liberty.

And viewers have also picked up on it!

On Twitter, one pointed out: “Jake doesn’t know how to have serious conversations. Saying ‘you’re my girlfriend’ does resolve anything.”

There’s also a growing concern that Jake is playing up to the cameras.

According to some, the timing of his declaration of love couldn’t have occurred at a more convenient time.

Meanwhile, he was also accused of encouraging the boys to cheat in Casa Amor to bag the £50,000 prize pot.

What happens on Love Island tonight?

During a preview clip for Thursday’s episode, Liberty was seen sobbing as she doubted her relationship with Jake.

It also showed the waitress showed storming away from the garden, removing her microphone pack.

But is it the end for Liberty and Jake? Find out on ITV2 tonight!