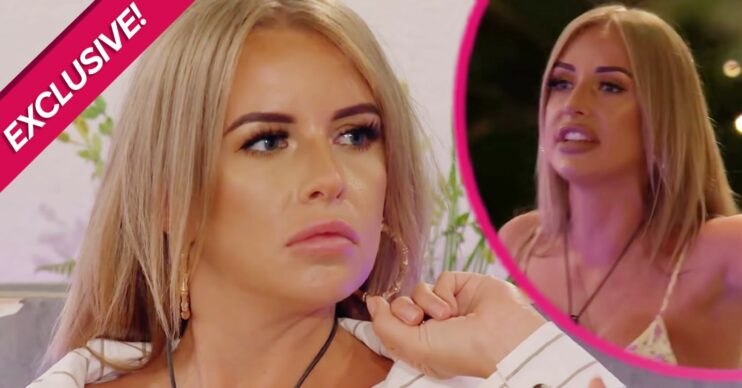 Faye Winter has found herself at the centre of some of the most dramatic moments during this year’s Love Island.

The estate agent certainly isn’t afraid to voice her opinion on the ITV2 series, even if it means coming to blows with partner Teddy Soares.

Meanwhile, during tonight’s show, things appear to get heated between Faye and Jake Cornish.

What should Faye work on?

But should Faye’s behaviour be a cause of concern?

According to Aaron Surtees of City Hypnosis, the 26-year-old reality star has some inner work to do before diving into love.

The highly trained hypnotherapist and psychologist told ED!: “It would appear from observing Faye’s behaviour that she could benefit from improving her listening skills.

“Listening to – and actually hearing – what’s being said to you before immediately jumping to an emotionally-driven response.

“It’s a key factor in avoiding the hotheadedness we often see displayed by Faye. One useful recommendation would be to count internally to five before responding to a situation or perceived insult. This allows for a moment of reflection and calm before emotions boil over.”

And it appears Faye could also use the method to help with her anger spells.

He added: “It’s fairly clear from observing Faye’s behaviour on the show that there are some anger issues that she could benefit from looking at and giving some attention to.

“That isn’t to say that she displays extreme behaviour, but it’s clear that whereas others appear more placid and relaxed.

“Her temper often gets the better of her, leading to intense situations and unnecessary conflicts.”

But as Faye prepares to leave the villa next week, how will she likely handle the negativity that comes with appearing on reality TV?

Aaron answered: “It would be only natural for her to feel even more defensive if criticisms are made via the media.

“She may perhaps feel considerable frustration at being unable to respond directly to detractors. She also may perhaps feel under siege and victimised as she realises how many people might be reading these negative statements about her.”

He added: “My advice would be to try and avoid as much negativity as possible. Even if it means resisting the temptation to read and hear what people are saying about her.”

So, what other red flags does Faye need to address in her behaviour?

The psychologist went on: “There have been times when Faye has been accused of being jealous and she even vowed to apologise to Teddy about it.

“If Faye feels jealously is something she wishes to address an anger management hypnotherapy programme could be effective in coping with her triggers.”

However, Aaron explained that it’s also possible for Faye work on her problems through mindfulness.

The expert concluded: “This can take just a few minutes a day, but is useful to help recognise and manage negative emotions and responses. In the end though it will be a process only she can manage and overcome.”