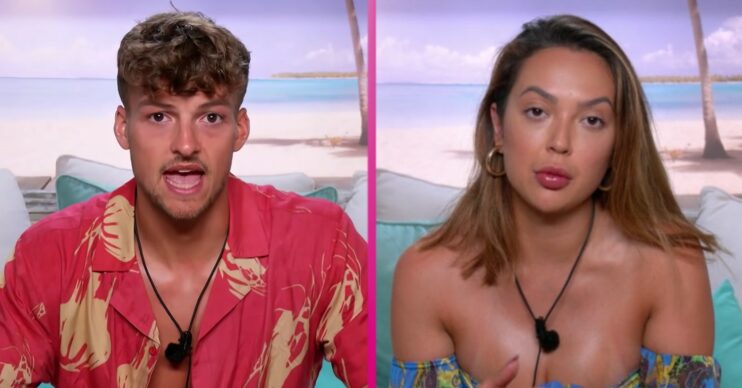 Love Island: Hugo fans claim Sharon is ‘faking’ feelings ‘to save her own skin’

Is Sharon 'clutching at straws'?

Love Island fans are convinced Sharon is playing a game after revealed she fancies Hugo.

During Tuesday’s show, viewers watched on as Sharon openly admitted to having a change of heart over Hugo.

The Islanders were previously paired together at the beginning of the ITV2 series, but failed to hit it off.

Earlier this week, Hugo chose to save the beauty queen during the recoupling.

The teacher made the decision in the hope that one of them may find love separately.

But then last night (July 13), Sharon admitted she was looking beyond their “friendship couple”.

Speaking to Kaz, she confessed: “Sharing a bed this time around is very different.

“I do think he is fit but is it that I just think he’s fit and nothing else?”

Kaz responded: “It’s not that you just think he’s fit because you guys actually get along. You like him as a person.”

Sharon added: “I think I did rule it out in the beginning but I think seeing qualities that were missing in Aaron and seeing them in Hugo has made me really think things through.

“He’s a really good communicator and we talk about everything and anything.”

A second shared: “Sharon will only use Hugo #LoveIsland.”

Another wrote: “Please don’t fall for Sharon’s [bleep] Hugo, she has zero interest in you and just wants to save her own skin.”

Sharon is so desperate. Hugo has said he likes natural. Clearly you’re not his type. You know you don’t even want him like that. You’re just moving thirsty.

sharon will only use Hugo #LoveIsland

I have a strong feeling that sharon doesnt actually want to have anything with Hugo. its almost like she only wants to stay in the villa #LoveIsland

A fourth said: “Hugo has been embarrassed so much this season, I’m sure it’s taken a toll on his confidence. I don’t think it’s really fair for Sharon to want Hugo to confidently initiate a romance without him even being aware of her feelings.”

A fifth complained: “This all of a sudden Sharon and Hugo is soooooo strange she’s clutching at straws.”

Meanwhile, others admitted to liking the potential pairing.

One added: “I’m actually interested in what happens next with Hugo and Sharon, I think they’re cute.”

Hugo and Sharon previously argued after she took offence to his ‘fake’ comments.

But it appears the two have put the clash behind them, after Hugo saved Sharon from being dumped.

In his speech, he said: “She’s got my back and she’s going to support me throughout this journey of me trying to find love.

Hugo continued: “I’ve just got a feeling love is round the corner for the both of us.”

Meanwhile, Sharon later added: “I really appreciate you having my back. I would have always have done the same for you.”