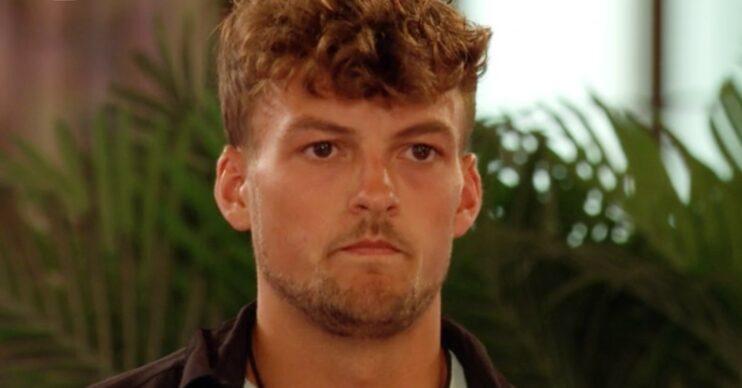 The lovable teacher is yet to find love in the villa

The Islander chose to save the beauty queen after being coupled up with Chloe Burrows.

During last night’s Love Island (July 12), Hugo poured his heart out as he listed the reasons for picking his pal.

What did Hugo say during his Love Island speech?

As the pair aren’t romantically linked, Hugo and Sharon are now a ‘friendship couple’.

During the dramatic recoupling, the teacher had to pick between Sharon, Faye Winter and Rachel Finni.

Explaining his decision, Hugo said: “I would like to couple up with this girl because I genuinely believe she wants the best for me.

“She’s got my back and she’s going to support me throughout this journey of me trying to find love.

He added: “I’ve just got a feeling love is round the corner for the both of us.”

Later on, Sharon shared her appreciation over the emotional speech.

The two were seen hanging out on the swing as they discussed the tense recoupling.

She said: “I really appreciate you having my back. I would have always have done the same for you.”

Hugo responded: “There was never any doubt in my mind who I was picking.”

Sharon added: “The speech was so cute. Obviously it was Faye, Rachel and I standing up there, and I thought we were all going to start crying.”

And the touching moment didn’t go unnoticed with viewers.

Fans of the show flocked to Twitter, with one saying: “Justice for HUGO!!!!!! That man is PURE.”

A second added: “Hugo deserves the world omg his speech was so cute #LoveIsland.”

In addition, a third wrote: “Hugo melts my heart! You go with that speech baby boy.”

Another tweeted: “I hate that Hugo hasn’t found anyone in the villa… only decent lad in there and has struggled the most #loveisland.”

However, some were confused following Hugo and Sharon’s recent argument.

Last week, the civil servant made Hugo cry after he admitted he didn’t like the “fake” look on girls.

Hugo melts my heart! You go with that speech bby boy 💙 #loveisland

Feel disappointed with Hugo picking Sharon. He gave her that lovely speech and was a pure gent but has he forgotten the way she spoke to you last week? Now who’s fake hun #LoveIsland

So Hugo saves Sharon after she freaks out at him for his fake comment? Should have sent her home for that. #LoveIsland

“He gave her that lovely speech and was a pure gent but has he forgotten the way she spoke to you last week? Now who’s fake hun #LoveIsland.”

Another agreed: “Why oh why did Hugo choose to save Sharon when she tore into him over what type of girl he liked. He should of picked Rachel all day long!!”

A third complained: “Why Hugo why??? Sharon said you were shy & boring at the start and went mental over the ‘natural’ comment. You’re FAR too good for her.”