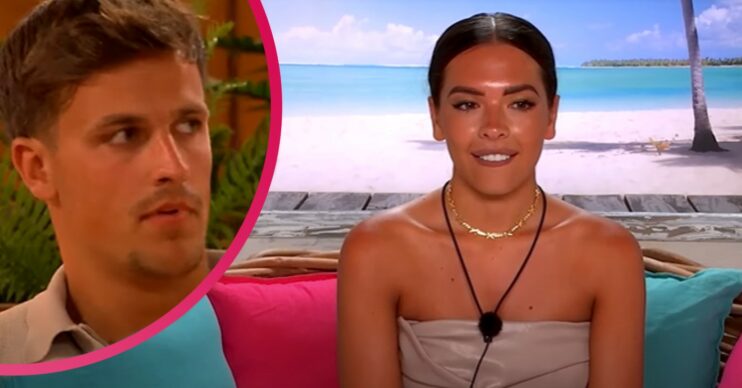 Getting to know someone is already tough, but Gemma Owen makes a mistake that all of us would be mortified if it were to happen to us.

After saying goodbye to Afia Tonkmor, the Islanders all gather around together in the kitchen.

Luca then comforts Gemma with a hug, but then things swiftly get awkward.

During their embrace, Gemma suffers a major slip of the tongue and she accidentally calls Luca by ex Jacques’ name.

But not only that, things are made worse considering Jacques is sitting directly next to them.

As a result, the rest of the Islanders are quick to comment on the situation.

Amber laughs: “Did you just call him something else?”

Read more: Love Island OPINION: Pied by Luca and dug out by Jacques – villa babe Paige deserves so much better

Luca says: “I know what she said.”

Having just coupled up with Jacques, Paige says: “Easy mistake to make, hun.”

Not long after Luca leaves the kitchen and walks off into the garden, Gemma asks the other Islanders: “That was bad wasn’t it?”

Paige answers: “That was bad, I am not gonna lie, he was stood there, you had your guy rubbing your shoulders, he’s stood there and you’re like… ‘Oh Jacques.'”

As a result of the chaos, Gemma makes an attempt to make amends with Luca by pulling him for a chat to settle the incident once and for all.

However, will Luca be able to forgive and forget?

Meanwhile, the latest drama comes after bookies revealed Luca is a top shout at being the top male on the show. He’s currently priced at 5/2 in that category.

However, Andrew Le Page and Tasha Ghouri remain the favourites to be the triumphant couple with oddsmakers.