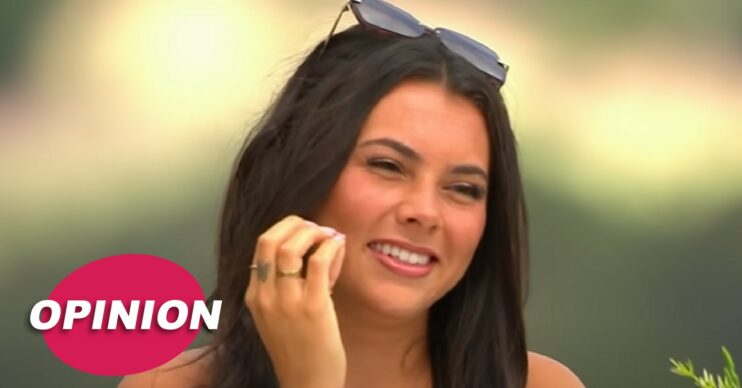 Love Island OPINION: Pied by Luca and dug out by Jacques – villa babe Paige deserves so much better

What's wrong with these boys?!

I think Love Island star Paige Thorne deserves so much better than how she’s being treated in the villa.

The ITV2 reality show kicked off last Monday and the Islanders have wasted no time in getting their flirt on.

As soon as Paige walked into the villa, I knew she was going to be one of my favourites and it seems viewers love her too.

But poor Paige doesn’t seem to be getting much luck with the boys in the villa and it baffles me.

The 24-year-old is stunning and has good banter but the boys don’t seem to be interested in her as much as the other girls.

I felt for Paige when she started growing close to 23-year-old Luca Bish, also one of my favourite Islanders, before his head was turned by Gemma Owen, 19.

Paige and Luca had started the show coupled up thanks to the public.

But then Luca realised he fancied Gemma and it wasn’t long before Paige was left out in the cold.

This meant Paige was left single but thankfully, she didn’t leave the villa as fellow Islander Liam Llewellyn had already decided to quit.

There was fresh hope for Paige last night when a new hunk entered the villa – Gemma’s ex-boyfriend Jacques O’Neill.

However, Paige didn’t let that stop her and she admitted fancying Jacques.

Even though the pair vibed on their date together, as the episode went on, Jacques seemed more interested in Ekin-Su Cülcüloglu.

It also looks like he’s going to play the field a bit which means Paige could end up getting hurt.

He also made a ridiculous comment about her appearance, saying in the Beach Hut after their date: “With Paige she’s a lovely girl, isn’t she? So I’m just getting to know her.

“Tonight might be a bit different all dressed up and that, so we’ll see what she’s looking like then. But like I say, she’s a lovely girl.”

I just don’t understand why none of the boys are swooning over Paige!

Viewers agree too it seems as one tweeted last night: “Paige is so lovely, naturally very pretty, good job. Literally, the whole package. I can’t understand why none of the guys are interested in her.”

Another said: “Jacques definitely still fancies Gemma. Can these [bleep] stop messing with my girl paige’s feelings… she deserves so much better.”

Another added: “Please bring another guy for Paige. She deserves better, please.”

Meanwhile, according to Betfair, Paige is the new 6/4 favourite to be the female Love Island winner.

Maybe we could just vote for Paige to win it by herself?!

Either the boys need to open their eyes and realise Paige is an absolute bombshell or Love Island bosses need to throw some more hunks in there so she can find the one!

Are you rooting for Paige too? Leave us a comment on our Facebook page @EntertainmentDailyFix and let us know.