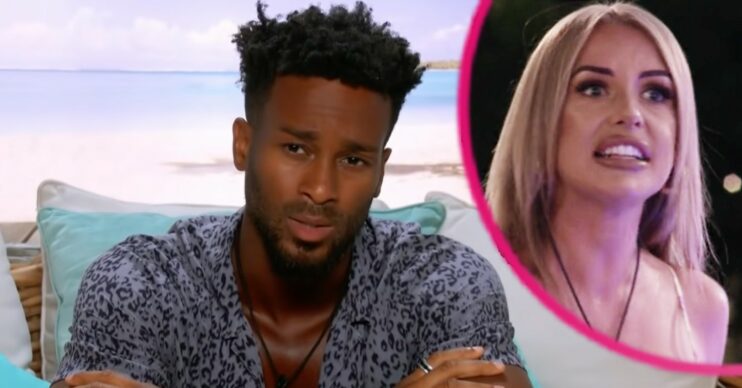 One pleaded, 'Please stop messing with Faye and Teddy!'

Love Island viewers have slammed producers of the ITV2 show after ‘messing’ with Faye Winter and Teddy Soares.

The couple appeared to be going from strength to strength, before the boys headed to the Casa Amor villa.

Since then, their romance has been plagued by drama.

What happened between Teddy and Faye?

During Casa Amor, Teddy remained faithful to Faye and even chose to sleep outside.

However, Faye decided to couple with new boy Sam Jackson.

The estate agent had been questioning their relationship following a postcard from the second villa.

The couple later rekindled their romance after Teddy returned from Casa Amor.

But Teddy and Faye were put to the test again last night (August 5).

On Thursday night’s episode, the Islanders took part in the movie night challenge that saw unseen clips played into the villa.

One clip showed Faye discussing with the girls whether Teddy was funny.

She was also seen flirting with Sam in a second video.

While Faye laughed over the clips, Teddy appeared visibly uncomfortable.

To add to the drama, the pair were seen arguing in a teaser clip for Friday’s episode.

In the teaser, Faye shouted: “I told you the truth and you told me jack [bleep].”

Teddy replied: “So I lied to you?”

Meanwhile, fans were left furious over the clip and blamed producers for the spat.

On Twitter, one shared: “I’m convinced the producers have a personal vendetta against Teddy and Faye because how many times are they gonna sabotage them like this #LoveIsland.”

Another added: “I’m actually raging at the producers, why do they keep doing Faye & Teddy like that? There were far worse things happen at Casa Amor why ain’t they showing what actually went down.”

I really want to know what the producers have against Faye and Teddy?

A third complained: “The Love Island producers are [bleeped] for the lengths they’re going to just to ruin Faye and Teddy. It’s actually revolting.”

A fourth raged: “I really want to know what the producers have against Faye and Teddy? It’s non-stop emotional manipulation. Faye only did those things because of the misleading postcard. She’s incredibly insecure and defensive – did you just want to get a big dramatic reaction from her?”

What are the producers playing at trying to mess with Teddy and Faye AGAIN? Seriously? #LoveIsland

I am so fed up with the way that the producers are actively sabotaging Feddy for their chosen winners. Faye has self-esteem issues & they need to tread very carefully with her mental health. And Teddy’s. It’s beyond ridiculous now. #LoveIsland

In addition, a fifth said: “The way it’s going Toby and Chloe are gonna win, producers please stop messing with Faye and Teddy!”

One viewer even threatened to boycott the show completely.

They wrote: “Yes they want to make good TV, but it shouldn’t be at the expense of potentially causing damage to a persons #mentalhealth, #selfesteem or #confidence. I don’t think I can continue watching #LoveIsland.”

However, another stated: “People keep saying that the producers are sabotaging Teddy and Faye relationship, personally I think that they are trying to save Teddy from Faye.”