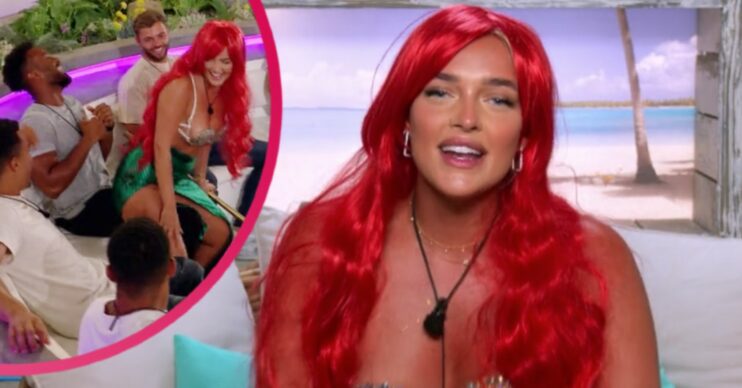 Her Little Mermaid costume went down a treat

Love Island star Mary Bedford stole the show during last night’s heart rate challenge – but for all the wrong reasons!

While her fellow Islanders chose a series of saucy outfits, the stunning model opted for a mermaid.

Love Island: What are the best Mary memes?

The task consists of the Islanders seeing who can get the most hearts racing.

During the challenge, the female Islanders performed sexy routines for their male co-stars.

Liberty rocked a cowgirl outfit, Millie was Lara Croft and Priya opted for a nurse.

However, Mary seemed to have pulled the short straw in a long red wig and green tail.

no but who made Mary dress up as the little mermaid for the striptease #LoveIsland pic.twitter.com/ymhFOJVFoE

Mary waiting for Aaron’s results praying the little mermaid wig did it for him #LoveIsland pic.twitter.com/6KUhLzw62t

When I see Mary walk in with that mermaid outfit. #LoveIsland pic.twitter.com/3ooUpDtBma

What was Mary thinking coming out in that mermaid costume.. #LoveIsland pic.twitter.com/qDOjcbclId

Poor Mary, they could’ve given her something sexier than that party city bargain bin mermaid costume! #LoveIsland pic.twitter.com/PM77CmWasY

Meanwhile, others compared Mary to a previous photo of Harry Styles!

However, some claimed that Mary had been set up by producers.

Why is Mary dressed like a mermaid??? They did her so dirty!!! #loveisland pic.twitter.com/y8FLDa3PcH

they set mary up with that little mermaid costume… #LoveIsland pic.twitter.com/IjmjelWmec

They did Mary dirty in the heart rate challenge cuz what in the little mermaid ? #LoveIsland

So, do the Islanders pick their costumes?

No, according to former winner Amber Gill.

Taking to Twitter last night, the reality star confirmed that contestants are given outfits by the show’s producers.

One fan questioned: “Ok we need @AmberRoseGill to confirm whether the islanders picked their own outfits for the heart rate challenge, or whether the producers have it in for Mary?”

Read more: Twitter has spoken – Love Island must get Liberty away from Jake

Meanwhile, Amber replied: “Are you OK? You think I chose a bustier tutu & tights.”