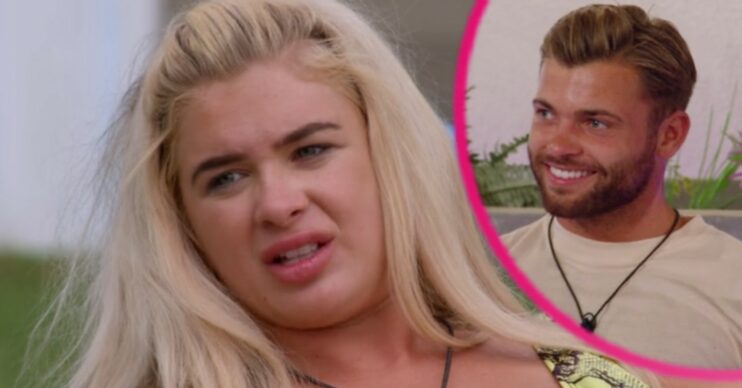 Twitter has spoken – Love Island must get Liberty away from Jake

'I hope she runs for the hills'

Love Island viewers have voiced their concerns over Jake Cornish’s behaviour towards Liberty Poole on Twitter.

The couple appeared to be going from strength to strength since coupling up during the show’s first episode.

But on Thursday (August 12), fans of the ITV2 dating series watched on as Jake held Liberty back from hugging her best friend.

The strange scene followed after Tyler asked Kaz to be exclusive.

Liberty, who shares a close bond with Kaz in the villa, wanted to be one of the first people to congratulate her.

However, Jake held her back and told Liberty to wait until Kaz came over.

He said: “She’ll come down and give you a cuddle.

“You don’t want to be up there with everyone, do you know what I mean? That’s your best mate!”

Liberty responded: “Nahh I just wanted when she came down, to be there for her.”

The next day, Liberty spoke to Chloe about her concerns over Jake.

She feared that her boyfriend was playing up to the cameras, before breaking down in the dressing room.

And it appears Jake’s behaviour didn’t sit well with some.

One wrote: “What was that weird controlling behaviour from Jake?”

Liberty needs to run, Jake using this “you’re my girlfriend” in response to everything is very scary #LoveIsland

A second said: “That scene where Liberty wanted to hug Kaz and Jake was trying to hold her back from hugging Kaz was sooo weird. It was giving Manipulative controlling vibes.”

Meanwhile, others urged Liberty to leave her boyfriend for good.

A second wrote: “Not really one to comment on #LoveIsland but the way Jake was with Liberty last night just left me feeling so uncomfortable. I hope she runs for the hills.

“Someone please talk some sense into her. He’s a walking red flag.”

A third raged: “Liberty needs to run as far away from Jake as she can.”

Another commented: “Jake is an oddball. His excuse for everything is ‘you’re my girlfriend’, poor from him. Run a mile Liberty, trust your gut.”

However, one defended Jake following the criticism.

One wrote: “Maybe people should cut Jake some slack. Liberty has always been way too clingy and besotted from the get go.

“It’s run its course and that’s clear to him. But he knows he can’t end just end it on tv and hurt her at the same time.”