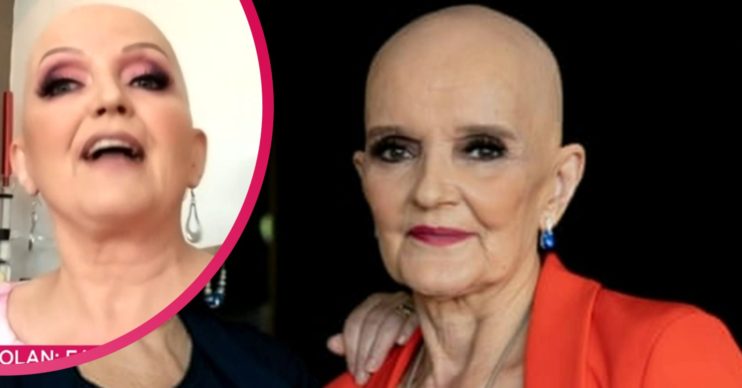 Linda appeared on the show with sister Anne

Linda Nolan appeared on Lorraine on Tuesday (October 13) to give fans an update on her cancer battle.

The singer was joined by her sister, Anne, who like Linda was diagnosed with cancer for a second time.

Does Linda still have cancer?

Anne also shared a positive update, saying: “I had an operation a few weeks ago and they didn’t find any cancer cells in the tissue.”

Opening up about the last few months, she continued: “We’d just been on a cruise filming and we were in isolation. Then a week after I got my diagnosis, then Linda got hers two days later.

Anne then interrupted herself, saying: “Sorry if I’m stuttering that’s part of the treatment!”

“No it’s not she had gin with her cornflakes!” joked Linda.

“With Covid it was a nightmare. We couldn’t go round to Anne and give her a hug. We ended up having our chemo together though,” added the star.

“The Nolans have had their fare share of heartache over the years. Hope that everything goes well for the future,” said one viewer.

“I love the Nolan sisters,” added another fan.

While a third tweeted: “Linda Nolan is amazing #lorraine”.

What happened to Linda and Anne?

Linda has previously battled breast cancer in 2006, cellulitis and lymphoedema in her arm in 2007 and cancer on her pelvis in 2017.

And, even though she has now finished her gruelling stint, she was sad that she finished before Linda.

Anne told the Daily Mail: “Chemo was absolutely horrendous for me and I was so happy it finally was over.

“But at the same time I felt a terrible melancholy that Linda wasn’t ringing the bell with me.”

Is Coleen Nolan going to get a mastectomy?

After seeing her sisters suffer, the Loose Woman star says that she is considering taking preventative action.

“It’s a really big operation and my sisters were quite shocked when I told them, but they’ve also been very supportive,” she told OK! Magazine.

“It’s like having two time-bombs sitting there, I still lie awake at night worrying. I’m in limbo and really struggling to decide.”

However, Coleen went on to admit that the surgery itself also worries her.

“My breasts are absolutely not worth dying for so I’ve no problem with getting rid of them. It’s the operation, the long recovery and the potential pain that I’m scared of,” added the star.