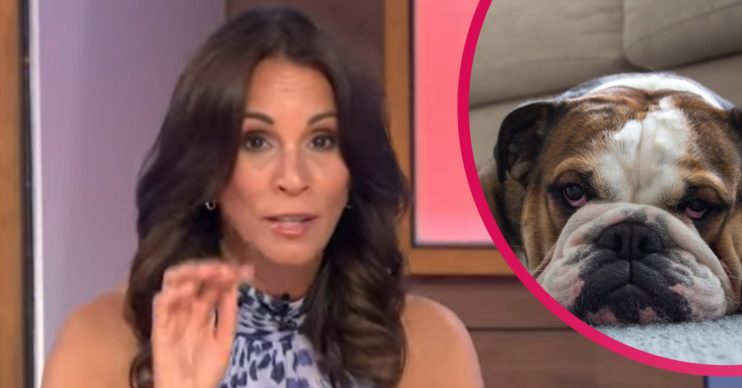 Is there an argument for a plant-based doggy diet?

It comes after Formula 1 champion Lewis Hamilton announced that his puppy is now on a plant-based diet. Lewis claims it has made Roscoe’s fur much softer and his swollen paws healed.

Read more: This Morning viewers fed up with Eamonn and Ruth’s bickering

She asked the other ladies, Nadia Sawalha, Denise Welch and Brenda Edwards whether they thought the idea was dangerous.

Nadia said her dogs love raw chicken and meat, and when they go out walking they always have a “cow trachea” in their mouths.

Brenda, who has cats, said her pets like their meat.

Denise felt there was “no doubt” that dogs prefer meat. But she said her friend has put her dog on a vegan diet to help cure its arthritis. She also revealed dogs on a vegan diet can live until their 20s.

Nadia challenged that it was shop-bought dog food that was the problem rather than actual meat.

Andrea read out a statement from a canine nutrition expert, Anna Ware, who said she doesn’t believe in it: “They’re biologically and physiologically pre-programmed to eat meat.”

And veterinary charity PDSA said: “Dogs are omnivores so they can eat both meat and plant-based food. It’s important that no matter what diet you choose you have your dog’s welfare at the heart of that decision.”

The British Veterinary Association said: “It’s possible that a dog can go on a vegan diet. We wouldn’t recommend it as pets need a nutritionally balanced diet and it’s very important before anyone considers changing their diet to consult a specialist vet.”

The debate left viewers at home unhappy. A Loose Women poll run on Twitter saw 80 per cent of viewers vote that it is cruel to put your dog on a vegan diet.

Dogs by nature are carnivorous not herbivorous, don’t force your veganism on to them, they don’t have a choice, you do! #LooseWomen

#LooseWomen It’s cruel. Dogs need meat in their diet to be healthy and happy. If you insist on feeding your dog a vegan diet or a home cooked diet, get expert advice from a reputable and experienced vet.

Whilst people are talking about vegan dogs, quick reminder that cats are OBLIGATE CARNIVORES and CANNOT eat a vegan diet. They HAVE to have meat to be healthy #LooseWomen

Unless your dog or any other of your pets have stated that they’d like to become vegan then it’s seems pretty abusive of people to impose their beliefs on them. People like that shouldn’t have pets because they’re just being cruel #LooseWomen

I 100% agree with the ethics of veganism. Forcing an animal to go against their natural diet is cruelty. If strict vegans want a pet get one that doesn’t naturally eat meat #LooseWomen

Some felt it was pushing your own ideas on the dog and suggested those pet owners bought an animal that was already a herbivore, such as a rabbit.

If you wanna put your pet on a vegan diet then buy a frickin’ rabbit! #LooseWomen 😡

I 100% agree with the ethics of veganism. Forcing an animal to go against their natural diet is cruelty. If strict vegans want a pet get one that doesn’t naturally eat meat #LooseWomen

My Dogs are vegan and go CRAZY for fresh veg. No innocent animals are hurt in the process. Not sure in the wild that a dog would rip a cows Throat out and eat it Nadia 😂 #LooseWomen

Is it cruel to put your dog on a vegan diet? Leave us a comment on our Facebook page @EntertainmentDailyFix and let us know what you think of this story.