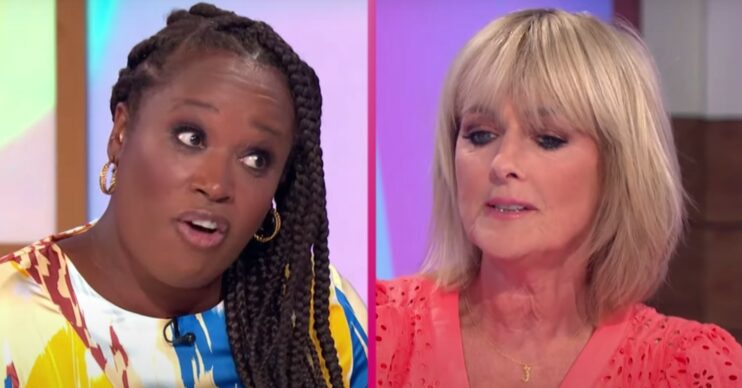 Spoke over each other at one point

The pundits spoke over each other at one point as comparisons were made between how migrants are treated in Britain.

ITV newsreader Charlene highlighted how she feels the government regard Ukrainians differently from people from other areas.

But tabloid columnist Jane insisted some migrants travel for economic reasons, rather than fleeing war.

Pondering why the government seems to welcome families from Ukraine more than other nationalities, Charlene said: “It feels as though not all migrants are the same.

“We treat one sector migrants slightly different from another.”

Jane, however, maintained whether applicants had left countries blighted by conflict was key.

“Not all of them come from a war-torn country,” Jane intervened.

“Listen, if I lived in a country that was economically much more substandard than this one and I wanted a better life, I’d absolutely try and get in,” she continued.

“But a lot of them are not coming from war torn countries. They’re coming to get a better life, and I can’t blame them for that.”

As Jane continued with a point about whether such efforts are “to the detriment of people already living here”, she was cut off by Charlene.

Charlene argued the trial scheme was a diversion by the government for other problems.

“Yes we are in a cost of living crisis, all those things, but it isn’t really the fault of the 28,000 people who arrived by boat last year.”

However, Jane replied: “Nobody is saying it’s their fault, what I’m saying is what is the solution?”

Viewers had mixed reactions to the segment on social media, with many suggesting the debate glossed over many details.

Nonetheless, there was support for both positions.

Someone else wrote: “Yes Jane! @loosewomen talking a lot of sense on the Rwanda Scheme #LooseWomen.”

And someone else questioned whether the panelists were using terms such as ‘migrant’ accurately.

“@loosewomen your chat about the Rwanda policy ignores the economic growth migrants contribute which can be used on our public services!” one person objected.