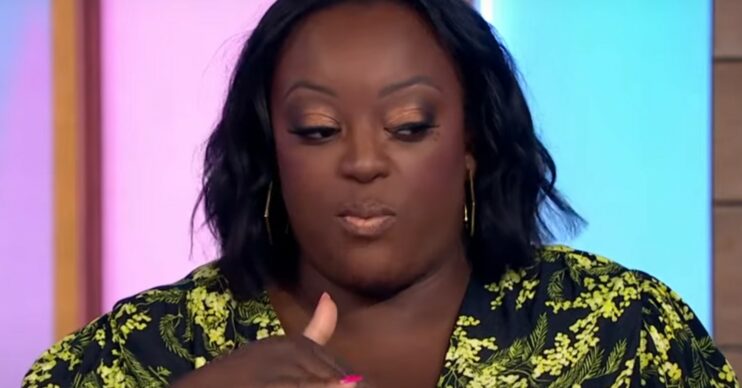 Loose Women viewers were all saying the same thing today about Judi Love on the show.

Judi and Brenda Edwards were invited to Buckingham Palace yesterday to attend a reception to celebrate the Commonwealth Diaspora.

The event was meant to be a formal occasion, however, in classic Judi style, she appeared to be anything but formal.

She opened up about her experience on Loose Women and had viewers in hysterics as a result.

Judi said: “There was a snack bar… and the bowls were empty by the time I was standing next to my table.

“And I was eating the doritos and I turned around and heard ‘Oh Judy it’s so lovely to meet you’ and that was Prince Charles. I was so overwhelmed. I said, ‘Oh I don’t know what to do! What am I supposed to do?’

“He goes, ‘Oh you’re not supposed to do anything, just be here!'”

Judi continued: “It was so nice, we had a good old chat, we were laughing…

“We were talking about the song Sweet Caroline, the grandchildren. I can’t lie, there were points [Charles, Camilla and I] were talking and [gestures herself smiling and agreeing] even though I didn’t know what they were saying.”

The TV star went on to confess that she may have misbehaved and done something she shouldn’t have.

She admitted that she ended up touching Prince Charles multiple times, despite not knowing if she was actually permitted to.

Judi admitted she also embodied the royals’ mannerisms as she spoke to them.

Judi said: “Everyone must have thought ‘What is going on?’ But it was an amazing time.”

Viewers rushed to social media to giggle at Judi’s retelling, with one tweeting: “Oh my goodness I love @1Judilove!”

What did you think of Judi Love’s stories on Loose Women? Join the debate on our Facebook page @EntertainmentDailyFix.