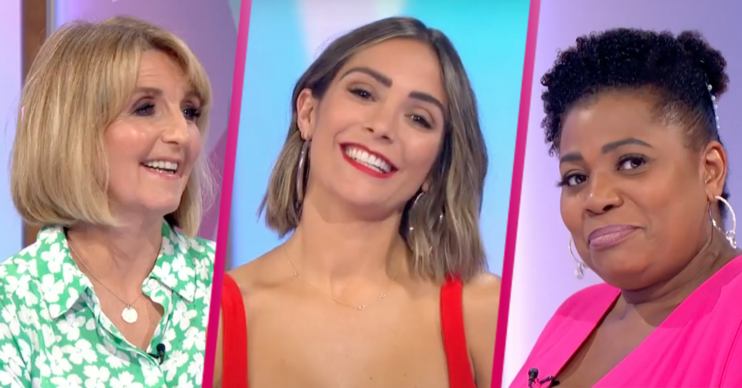 The Loose Women ladies came under fire today (July 7) as they hosted a segment called “Is it cruel to boil a lobster alive?”

Kaye Adams started the debate, prompted by the news that the practise of boiling lobsters alive may soon be banned in Britain.

Admitting she felt “terrible” for having done it herself, co-panellists Frankie Bridge, Brenda Edwards and Janet Street Porter were soon seen in fits of giggles.

What did Kaye say on Loose Women today?

Kaye admitted she had boiled a lobster alive 20 years ago while making lobster ravioli.

She said: “I’ve got a terrible confession to make, I’ve done that,” as her Loose Women co-hosts laughed.

So what happened when she cooked it?

Kaye then explained that when her other half bought the lobster home, with its claws taped up, she “thought it was sleeping”.

“We put it in the water and it came alive and started to go ‘eeeeeee’,” she explained.

“It jumped off the counter and started to try and make its escape. It was the most awful experience.”

It jumped off the counter and started to try and make its escape.

Frankie did ponder why the lobster has to go in alive, and admitted she was a “bit of a hypocrite” as she eats meat.

She then mentioned the screaming sound it made.

“That’s the air escaping from the shell,” Janet explained

So how did Loose Women viewers react?

Not well, it has to be said.

“Boiling lobsters alive is just pure cruel, blatant animal abuse and nowhere near humane,” said another. “Time to ban it.”

A third added: “Could someone boil the #loosewomen and see if they’re still laughing? Laughing at a lobster boiling alive is shameful, they should be disgraced.”

Another said: “Is it cruel to boil lobsters alive?” Oh I don’t know, is it cruel to make a human slowly and painfully die? This is disgusting and shouldn’t even be a debate.”

“A lobster is a living thing,” another chipped in. “Would you boil alive a chicken for instance? Cruel and ban it…ps it’s NOT funny!”

“Kaye must think we are idiots,” said another. “You don’t cook lobster without knowing what you are doing or looking at a recipe.”

“Shame on you Loose Women,” said another. “Absolutely disgusting laughing at animal cruelty. How is this funny?”

Did you see the debate? Tell us your thoughts on our Facebook page @EntertainmentDailyFix.