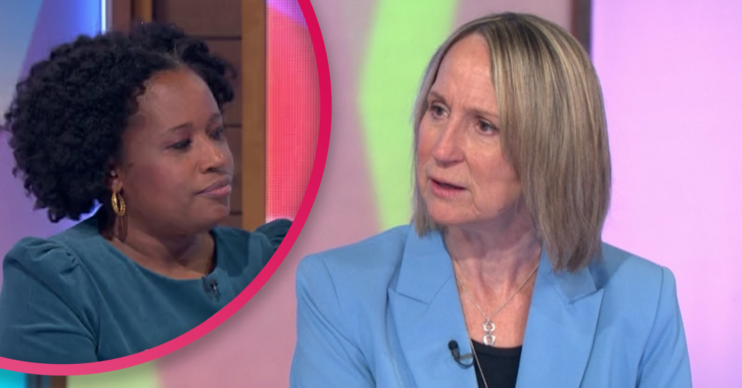 She's been made to feel like a 'freak', though

Loose Women panellist Carol McGiffin divided opinion today as she responded to the Pope’s comments that choosing not to have children is selfish.

Carol – who doesn’t have kids – was joined on the panel by Denise Welch, Katie Piper and Charlene White, all of whom are mothers.

Loose Women anchor Charlene opened the debate by asking Carol her views, and it’s fair to say the ladies were in for a bumpy ride as she unleashed her wrath on the subject.

What did Carol say on Loose Women?

Carol started: “This whole discussion, this assumption, drives me to distraction.

“Well frankly I think it’s selfish if you have children, especially if you don’t really want them and you have them for whatever reason, to keep a relationship together, to get benefits, whatever,” she said.

“A lot of people treat their children badly – they’re the selfish ones, I’m not selfish because I didn’t think I would’ve been a good mother.

Read more: Coleen Nolan forced to deny man is her boyfriend after photo on Loose Women

“I didn’t want to be one. I never had a maternal instinct but I’ve had a lot of people say really insulting things, like I’m a freak, like I’m weird because I don’t want children and they can’t understand my decision.

“Well guess what I can’t understand why anyone would want to have children,” she slammed.

“The worst thing anything ever said to me was: ‘Do you know what Carol, you would be a much better person if you had children.’ I’ve never forgot that, it was a friend of mine, it’s so rude.”

Charlene then asked Carol what she says when people say “awful” things like that to her.

As the titles rolled, Loose Women viewers took to social media to join the debate.

One said: “How is Carol allowed to make comments on a women’s pregnancy and that it’s ‘their fault’ they’re pregnant?

“So disrespectful and inconsiderate for those forced into pregnancy or unable to get abortions in 2022. Disgusting,” they added.

Another commented: “How DARE you allow Carol to make comments on a woman’s pregnancy.”

“Oi, McGiffin, if no one got pregnant there wouldn’t be anyone making whatever brand of idiot juice you’re drinking,” said another.

‘No regrets’ over not having kids

However, many people agreed with Carol.

“I love Carol! I agree with her views, it’s her choice. It’s patronising and nasty when even friends would say: ‘If you have kids you’d understand.’ I do have kids now – adopted – and make sure I never say that to people,” said one.

“I’m 42 and have no kids! No regrets at all and definitely not selfish!” said a third.

“Agree with Carol – if anything it’s selfish to have children that you can’t afford or that you’re not ready for,” another commented.

However, others raged that the debate shouldn’t even be given airtime.

“‘Is it selfish not to have kids?’ OH MY GOD. It is 2022. WHY is this even a conversation? Never mind on national television!” slammed one irate viewer.