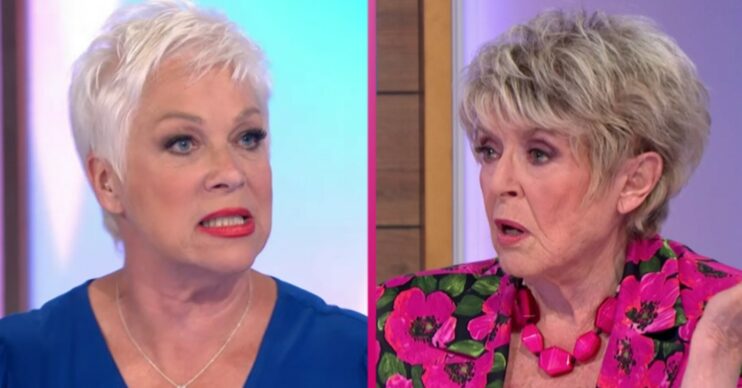 Loose Women star Denise Welch appeared furious with Gloria Hunniford today, as the two were embroiled in a heated debate over COVID rules.

Tensions boiled over on the ITV programme on Tuesday (June 22).

During the show, Denise clashed with her co-star as she insisted restrictions needed to be lifted.

Denise’s outburst follows shortly after the star was unable to accompany her dad in an ambulance over the weekend.

Meanwhile, football fans were allowed to gather to watch the Euros.

Denise, 63, explained: “He was very poorly the other night and had to be transported to another hospital in the middle of the night.

“He had to go alone in an ambulance because I wasn’t allowed to go.”

“And that is one person out of thousands of millions who have not been able to do this through this crisis!”

Gloria, 81, later added: “I don’t believe the NHS had a carnival every time they came to clap outside.

“I have to say and you can nitpick any situation…”

But as Denise interrupted, Gloria firmly added: “Hang on a second, Denise.

“But I just feel like the NHS has done everything they possibly can. I think they have been amazing.”

During the debate, the pair also clashed over lockdown restrictions ending.

Denise declared we needed to “move on” and hit out at the “hypocrisy” of the government.

How did Loose Women fans react?

Meanwhile, the debate didn’t go unnoticed with viewers at home.

Many were quick to pick up on how angry Denise appeared.

One tweeted: “@loosewomen as much as I agree with a lot of what @RealDeniseWelch says please, stop shouting at @gloriahunniford #norespect.”

You can debate without shouting over each other

A second agreed: “Absolutely agree. Whatever our opinion, you don’t constantly over shout & over talk someone else’s chance to give an opinion. Denise Welsh was rude & totally disrespectful to Gloria Hunniford. No respect shown.”

In addition, a third said: “It’s like the Denise show again today. Let the others speak! This panel is the only panel that end up arguing like that.

“Think they need to have a re think about who they employ on there. You can debate without shouting over each other. Clearly this lot cannot.”

@loosewomen no need for Denise to get so Aggy with Gloria, everyone entitled to opinions, have respect, listen to each other and be kind! Awful to listen to

There are ways to debate. Denise screeching at Gloria, and not letting anyone else talk is just rude. Stop bloody screaming! #LooseWomen

@loosewomen I agree with Denise, there is one rule for sports and another for everyone else regarding distancing. Why is it always sport that get away with stuff. Now one of the players has covid!

@loosewomen Denise and Carol, totally agree with you both! lockdown should end and everyone get back to normal! Gloria,if you have been double jabbed, why should you be frightened of those who haven't?

Did anyone agree with Denise?

Another shared: “Denise seems really angry and confrontational today… is it just me?”

A fourth complained: “You do not need to get your point across by shouting Denise. I would rather the government were careful then my loved ones dying.”

However, others agreed with Hollyoaks star Denise.

One wrote: “I agree with Denise!! Were those footie fans seen in central London Saturday night all tested and vaccinated??”

Furthermore, a second shared: “I never agree with Denise APART from today soooo many double standards it’s not fair ! #LooseWomen.”

A third added: “So pleased that Denise & Carol had the courage to expose the double standards that this government is clearly slapping us in the face with.”

Another wrote: “I love seeing the @loosewomen have a feisty debate. I’m in 100% agreement with Denise!!! I love seeing her strength and passion.”