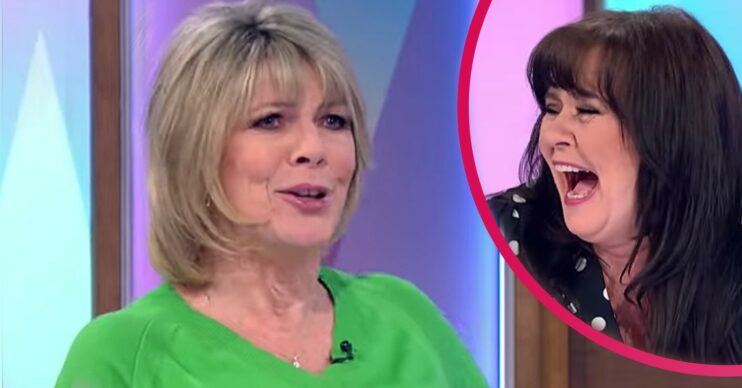 Loose Women host Ruth Langsford was left mortified when she learned that she had made a list of the top 10 unlikely celebrity crushes.

Ruth, 61, hosted the show today (June 15) but was distinctly unimpressed when she found out the news.

In fact, she called it “rude”.

What happened to Ruth Langsford on Loose Women today?

Co-host Coleen Nolan broke the news to Ruth, telling her that a new poll had ranked her among the top 10 unlikely celebrity crushes.

“Am I?” Ruth exclaimed. “Of celebrity crushes? I’ve never been on those lists.

Coleen tried to smooth things over by saying: “I’m laughing now but when I saw it I was actually jealous.

“I don’t even get on the list of unlikely crushes so every credit.”

But Ruth remained unimpressed: “What does unlikely mean?!”

The poll, which ED! revealed yesterday, actually called those on the list “embarrassing” crushes or “guilty pleasures”.

After Ruth took the news badly, Coleen revealed who else was on the list.

This Morning return for Ruth and Eamonn

There is some good news despite the poll result.

Ruth and husband Eamonn Holmes have confirmed they’re returning to This Morning to present the show for seven weeks during the summer holiday season.

Read more: This Morning: Eamonn Holmes and Ruth Langsford to return for summer

There was uproar when the duo didn’t cover for Phillip Schofield and Holly Willoughby during the recent half-term.

They will now take their places on the sofa from July onwards.