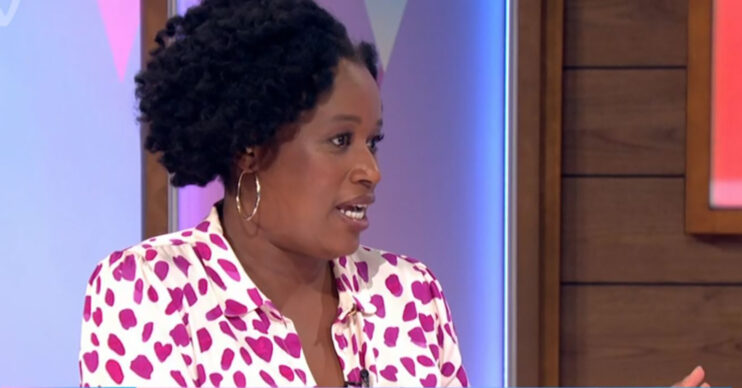 Loose Women: Charlene White under fire for comment about ‘not liking animals’

Loose Women host Charlene White has come under scrutiny from fans of the show after admitting she doesn’t like animals.

The TV presenter became the subject of scathing tweets from viewers of the show today (August 23) as the panel discussed dogs sleeping with their owners.

The debate saw the women divided as half the panel felt dogs are just like members of the family – but the others saw issues with hygiene.

Charlene asked: “Would you be happy for your toddler to sleep with your dog?”

Judi responded: “Personally I don’t think I’d want my toddler to be sleeping with a dog. It’s unhygienic.”

However, when Charlene admitted she “doesn’t like animals full stop,” and agreed it seems “unhygienic” furious viewers shot her down on Twitter.

Read more: Stacey Solomon clears up confusion over Loose Women appearance as she takes over as host

One scathing viewer ranted: “I was put off her in her first LW show when she made it obvious she doesn’t like animals. Next day on the news, she was fawning over a dog story, saying how cute it was. Disingenuous.”

Another wrote: “Completely changed my opinion of Charlene White after saying she ‘doesn’t like animals, full stop’. Disgusting.”

A third viewer chipped in: “Same here. Don’t understand anyone who doesn’t like animals. They’re better than humans! Not saying everyone has to love them but at least care about their well being and happiness. My little dog is my world! Sweetest little soul.”

However, some viewers share her view as one posted: “I agree no toddlers sleep with family pets!!!!!!!! I love animals.”

Meanwhile Linda and Jane disagreed over the topic.  Linda said: “I think it depends on the dog. We had George who was a staffie for 11 years, and he was the gentlest, kindest dog.

“He loved the kids, they’d ride him, play with him.”

Jane then admitted that her dog isn’t even allowed upstairs.

She explained: “He’s in the kitchen, he’s not allowed on the furniture – he’s a dog!”