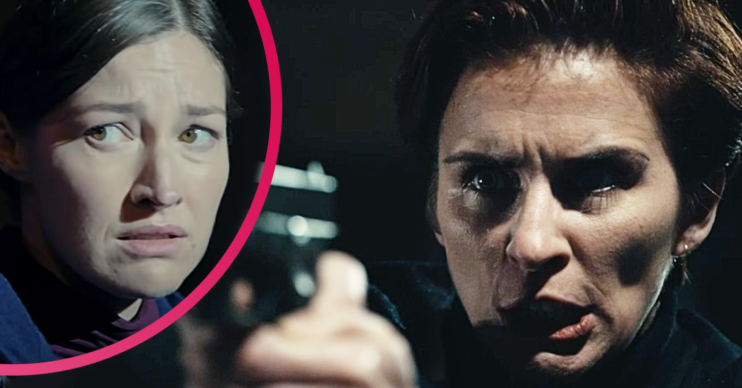 The hit BBC One crime drama left viewers hanging once again with an unbearable cliffhanger.

But now fans think they’ve cracked it – and the theory is good news for fans of Kate Fleming (Vicky McClure).

What happened to Kate in last night’s episode of Line Of Duty?

At the end of episode five, Jo Davidson (Kelly Macdonald) lured Kate to a deserted lorry park to iron out the tensions between the two.

Over the course of the episode, Kate had exposed the Organised Crime Group’s weapons workshop and was becoming a general nuisance.

Read more: Is Kate Fleming dead in Line of Duty? ‘The main cast realise that it’s possible [they could die],’ warned Jed Mercurio

So much so, the person at the top of the chain ordered Jo to take out Kate.

And, at the end of the episode, there was an almighty armed stand-off between Kate and Pilkington.

As the credits rolled, two shots were fired and fans feared the worse – could this be the end for one of AC-12’s finest?

What is the fan theory?

A new fan theory suggests that Kate survives the shoot-out.

The trailer for series six of Line Of Duty – released earlier in March – contained a whole bunch of scenes from the series.

One of them, a viewer on Twitter says, shows both Kate and Jo from a scene that hasn’t been shown yet.

THIS SCENE HASN’T OCCURRED YET. #katefleming lives for at least 1 more episode.

“#katefleming looks p*****, #jodavidson has her hands in the air.

“THIS SCENE HASN’T OCCURRED YET. #katefleming lives for at least 1 more episode. #motherofgod.”

What will happen next week?

ED! checked out the trailer for itself and found a scene showing Kate and Jo emerging from a car, with a police spotlight on them.

They were both wearing the same clothes from the shoot-out, with Jo looking very sheepish with her hands up.

Could Jo have shot Ryan Pilkington to save her friend and finally give herself up?

Or, could DCS Carmichael have shot Pilkington in order to cover things up?

Perhaps the scenes included in the trailer is a red herring.

A lot of fans “have worked it out”

On this morning’s Good Morning Britain, Ted Hastings himself (actor Adrian Dunbar) said that “a lot of Line Of Duty fans know” what happened to Kate.

He told hosts Adil Ray and Susanna Reid that a lot of eagle-eyed fans have already worked it out.

Read more: Line Of Duty: Is Kate dead and three other questions we need answers to

However, Adrian did not disclose what the fan theories are but just said: “There’s been a very big clue.”

Viewers will find out what happened next week.