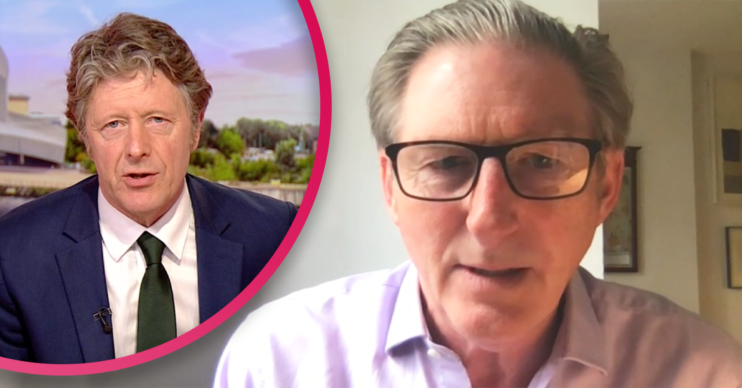 'I'll throw you away in a minute'

Line of Duty star Adrian Dunbar hit back at a comment made by BBC Breakfast host Charlie Stayt during an appearance on the show this morning (March 18).

Appearing via video link, Adrian chatted about the new series, which launches this weekend.

After showing the trailer, BBC Breakfast host Charlie asked Adrian to recite a line from the clip – and it’s then things got a little bit cringe.

What did Charlie say to Adrian on BBC Breakfast?

Charlie asked Adrian: “Do you ever think, I’ve got a juicy line there, I’m going to give it some welly?”

He then asked: “Can you finish the line for me? It starts with ‘when did we stop….’

“Can you recite that line for me?”

I’ll throw you away in a minute.

Adrian did as he was asked and repeated: “When did we stop caring about honesty and integrity?”

Adrian responded deadpan: “I’ll throw you away in a minute.”

After remaining straight-faced for a few seconds, Adrian smiled as Charlie’s co-host Naga Munhcetty laughed at his comment.

How did viewers react to the BBC Breakfast Line of Duty interview?

One even called him a “complete moron”.

“Charlie really is a complete moron. Thankfully #adriandunbar isn’t rising to their stupidity,” they said.

Read more: Jed Mercurio hints even the top three characters aren’t safe from being killed off

“How dare Charlie speak to the great Adrian Dunbar like that! #BBCBreakfast,” said another.

“If Adrian Dunbar could punch someone through a screen…,” another viewer commented.

“Charlie is having a shocker,” another commented.

One person said they thought Adrian’s reaction was “brilliant”.

“Charlie Stayt: ‘Awww, you didn’t sell it. You threw the line away.’ Adrian Dunbar: ‘I’ll throw you away.’ Naga absolutely loved that. Brilliant,” they said.

Line of Duty actor, Adrian Dunbar talks to #BBCBreakfast about filming season 6 of the series during the pandemic ⬇️

Others commented on Naga and Charlie’s questions to Adrian.

“They have the capacity to ask the most stupid questions,” said one.

“Charlie Stayt and Naga Munchety have the capacity to ask the stupidest questions,” another agreed.

During the interview, Charlie asked Adrian: “Do you instinctively not trust people in waistcoats?” in reference to his co-star Martin Compston’s character Steve Arnott’s attire.

He then asked: “What about judging people by their shoes?”

Although Adrian appeared a little bemused by the line of questioning, he did play along and offer an answer.