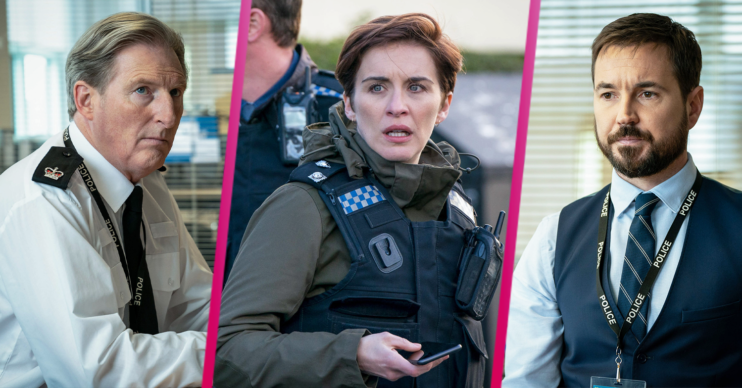 No character is bigger than the show, it seems…

Line of Duty creator has said that even the top three characters aren’t safe, just days before the new series hits our screens.

And is seems no one is bigger than the show.

What did Jed say about the new Line of Duty?

Speaking during an online Q&A, the Line of Duty creator was asked if he has ever thought of killing off the top three.

However, how long for remains to be seen…

“We all get on brilliantly, but everybody knows that we’re serving something bigger than ourselves, which is Line of Duty. And one of the things about the show is that nobody’s safe,” he said.

Everybody knows that we’re serving something bigger than ourselves, which is Line of Duty. And one of the things about the show is that nobody’s safe.

“That’s what keeps the audience on the edge of their seat. So I know that it would be a sad day, but I think all the main cast realise that it’s possible.

“And you know, we’re mates, we talk about it, we joke about it. It’s something that no one would relish, but everybody would understand.”

Will there be a series seven?

With series six yet to premiere, thoughts are already turning to the next series.

However, it would appear it isn’t guaranteed to hit our screens.

All three stars want it to happen, but executive producer Simon Heath has said it’s a case of wait and see.

He admitted: “Let’s see how this season performs. We just enjoy making one season at a time.”

Martin added that creator Jed takes it one series at a time because he wants to “judge the reaction of the audience”.

Line of Duty ‘could end now’

He added: “Right now, it could end and we could come back.

“Definitely with Jed there’s always potential for it to go on. We could always start a new case.

“There’s always corruption out there, as he would say, but at the same time where there’s a lot of big questions getting answered in this series, there’s always loose ends.

Exec producer Heath added that some moments in the upcoming series would “break the internet”.

The new series of Line of Duty starts Sunday (March 21) at 9pm.

Head to our Facebook page @EntertainmentDailyFix and tell us if you’re excited for the new series of Line of Duty.