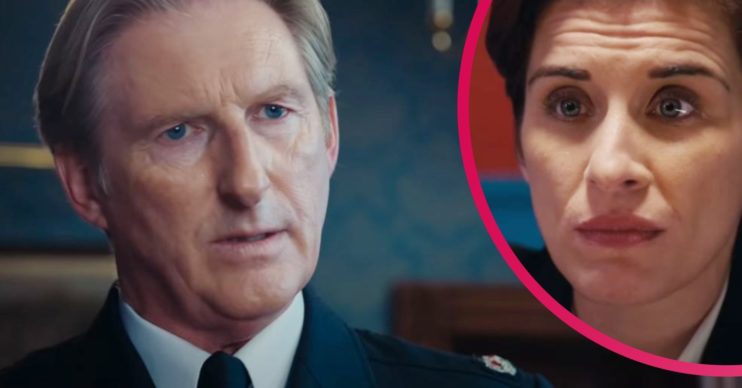 How far along the trail did you get?

Line Of Duty series 6 is nearly here and the BBC caused a storm this week with a brand new trailer.

Eagle-eyed fans of the hit cop drama quickly noticed that the one minute 11 second trailer, shared across the Beeb’s social channels on Tuesday (March 9) pointed towards a trail of hidden clues and Easter eggs.

Here, we’ve compiled a list of all the clues to save you the laborious task of sleuthing through the entire trail yourself.

The first is a magazine at the very start of the trailer, with a cover featuring murder victim Gail Vella (Andi Osho).

It contains a QR code that leads to a secret letter.

It in, he questions Ted Hastings’ abilities as leader of the anti-corruption unit AC-12, asking if it’s time for a change.

The letter contains a link to the next clue.

When you click the link in the letter, it takes you to a pharmacy prescription belonging to Steve Arnott (Martin Compston).

It’s concerning medication for Steve’s back pain. Fans will recall he sustained injuries in an attack in series four, when a member of the Organised Crime Group jumped him with a baseball bat, threw him down a set of stairs and left him for dead.

The prescription contains Morse code which, when deciphered, leads to the first of several videos in the trail.

The first video, an unlisted clip on YouTube, sees the cops reveal they have found no evidence of institutionalised corruption following a police investigation.

The video’s description contains a link that points to Google Maps.

Following the link in the video takes you to 522 Green Lane, Birmingham, on Google Maps.

It’s not clear what the significance is of the area or the images shown on Google Maps.

Season one of Line Of Duty filmed in Birmingham, before the show moved filming to Belfast.

Second video of messages being deleted

If you go back to the first video, the news ticker on the screen contains an equation. Once solved, it provides a link to a second video, this time showing a pair of hands holding a phone.

You’ve conducted yourself admirably and to the letter of the law.

The person proceeds to delete text messages, including one containing a link, as reported by The Tab, to a third video.

Viewers see a board with pictures of the three known Hs – the ring of corrupt officers or staff working in Central Police – with one space left for a fourth H.

Chloe asks Steve if there’s a “fourth” out there and it cuts to a clip of DI Kate Fleming (Vicky McClure), possibility hinting she’s a suspect.

Next to the pictures is a post-it note containing a code that leads to the final secret trailer, when added to BBC.in/

The last trailer features Ted Hastings’ (Adrian Dunbar) voice, congratulating fans on making it to the end – and inviting them to join AC-12.

He says: “This is Superintendent Ted Hastings. Yes, like the battle. Well done you’ve cracked it! You weren’t born yesterday were you? You’ve conducted yourself admirably and to the letter of the law, and not a single stone left unturned. With skills that sharp, you could teach Arnott and Fleming or two. Maybe you should come and work with me?”

What did you think of the Easter egg trail? Are you excited for Line Of Duty series 6? Leave us a comment on our Facebook page @EntertainmentDailyFix and let us know.