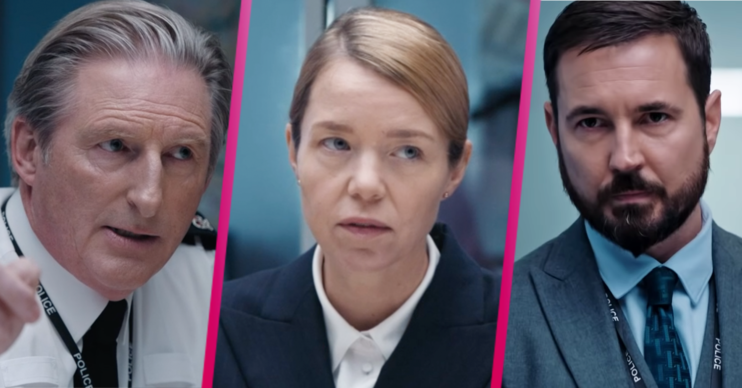 They'll appear on This Morning on Monday!

With the Line of Duty finale edging ever closer, it’s been revealed that the identity of H will be unmasked.

The series 6 finale airs on Sunday night (May 2) at 9pm on BBC One.

And, after catching the end of This Morning today (April 30), it appears Line of Duty fans will get to find out the identity of the fourth man.

Hosts Alison Hammond and Dermot O’Leary were in full Line of Duty mode, with Dermot even wearing a waistcoat like dapper Steve Arnott.

Read more: Martin Compston reveals ‘out of hand’ messages from fans he wishes he hadn’t seen

However, it was Alison’s comments right at the end of the show that left Line of Duty fans most excited.

She revealed that, come Monday, H would be unmasked and sitting on the This Morning sofa.

So who will it be? Well, bookmakers Betfair has compiled a list of suspects – and the odds of them being H.

Line of Duty finale: So who’s favourite to be H?

Unsurprisingly, Patricia Carmichael is the 2/1 favourite to be unmasked as the fourth man, or indeed woman.

Hot on her heels is Philip Osborne with odds of 4/1.

The gaffer himself, Ted Hastings, is next on the list with odds of 8/1.

Marcus Thurwell – so far only see in pictures and presumed dead – is next with odds of 11/1.

Read more: Evidence is stacking up the Chris and Chloe are both bent ahead of Line of Duty finale

It’s no surprise that Ian Buckells is on the list – he might be worth a punt though with odds of 16/1.

Finally, believe it or not, Kate Fleming and Steve Arnott make the list.

Bookies are offering odds of 20/1 on Kate being H and 33/1 on waistcoat-clad hottie Steve being named as the fourth man.

However, there is a little curveball on the list.

Betfair are offering odds of 4/1 that it’ll be an unknown character, or someone not currently on the suspect list.

‘The show’s biggest baddie is leading the way’

Betfair spokesman Sam Rosbottom said: “Line of Duty fans have been obsessed with finding out who H is for years .

“And mother of God, it is the show’s current big baddie Patricia Carmichael who is leading the way in the betting at 2/1, closely followed by Chief Constable Philip Osborne at 4/1.

“While question marks on Ted Hastings for a number of series has him in third favourite at 8/1, we haven’t ruled out the ultimate twist of Kate Fleming in fact being part of OCG all along.”

Sam added: “And it’s just 4/1 for H to be someone we have not yet encountered as the show reaches its climax.”