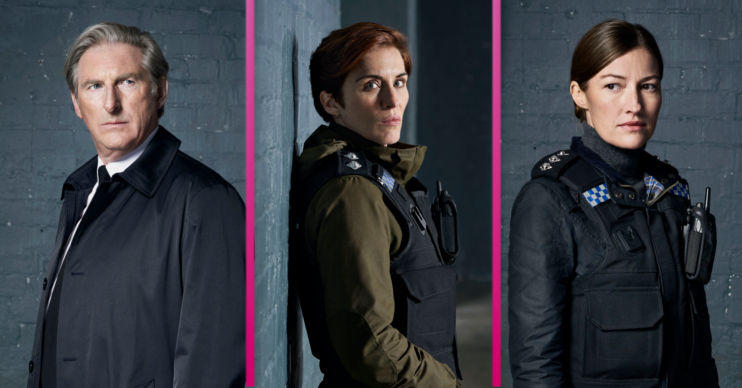 Line of Duty episode six: Seven questions we need answers to in next week’s final episode!

Line of Duty edged towards its final episode with a thrilling instalment tonight (Sunday April 25).

But while some things were revealed, others were not.

And now we need to know! Especially with the series finale next week.

What are our burning questions after episode six of Line of Duty?

Who is Jo Davidson’s ‘father’?

After Kate’s fate was revealed after the shoot-out, she and Jo Davidson went on the run.

Together they gave her a good going over, with AC-12 urging her to reveal all about her past.

While she persistently replied, “no comment” to many of the questions, she did open up about her family history after Steve had informed her that Tommy Hunter was both her uncle… and her father.

Yes, poor Jo Davidson was a product of incest.

Genuinely shocked by the revelation, Jo then opened up a bit.

She told her interrogators that she was born into a life of corruption and that her mother – Samantha Davidson – had taken her own life because of Tommy’s increasing influence in her life.

She also admitted that the man who she thought was her father was also a bent copper, but refused to disclose his identity.

So who is he and is he someone implicated in the OCG conspiracy?

Why didn’t Jo know Gail Vella was looking into the Lawrence Christopher case during episode six of Line of Duty?

Jo pretty much knew everything about the Gail Vella case, some elements of Ian Buckells’ role in the conspiracy and even why Ryan Pilkington was placed on Operation Lighthouse.

She even admitted to staging the armed robbery in episode one, framing her ex Farida Jatri and hiding evidence from the case.

But strangely she didn’t know that Gail Vella was looking into the Lawrence Christopher murder.

Even though she was groomed to infiltrate the police and do the OCG’s bidding, why didn’t she know about certain aspects of the case she was working on?

Will Steve attend a medical review?

We haven’t seen Steve and his addiction to prescription painkillers for a few weeks now.

But in this episode, he did finally open the email from the occupational health department.

It told him that if he didn’t go for his medical review he would be suspended.

Not a good look for a newly promoted DI, but will he take the risk and go for his review?

Chief Constable Philip Osborne has appeared in this series of Line of Duty like a spectre.

We’ve seen him on news footage slowly dismantling the police force and, at the end of this episode, he said in another news interview that he would take care of any threats from within or outside of the force.

With his dodgy history working in counter-terrorism (which Steve has first-hand knowledge of) and being part of the Lawrence Christopher murder investigation, Osborne is definitely (or should that be ‘definately’?) a prime suspect.

And, with Marcus Thurwell now dead, Osborne is surely bang to rights as ‘H’ or ‘The Fourth Man’.

As soon as Carmichael strode into AC-12 and suspended its surveillance ops, she’s been making quick work of undermining the anti-corruption unit.

In this episode, she often made references to the Chief Constable and even revealed that in conjunction with Osborne had authorised the bugging of AC-12 vehicles.

She also constantly steered the conversation away from Osborne and systemic corruption during Jo Davidson’s interrogation.

So what is her game here?

Is she in cahoots with Osborne, or is she actually ‘H’?

During Jo Davidson’s interrogation, any mention of Lee Banks – who he visited in prison during series five – made him turn as white as a ghost.

Ted is a man under pressure and he looks as though he’s broken.

He knows his retirement is looming and he seems as though he’s desperate to solve this case, which could be his last.

We last saw Ted shaking uncontrollably and smashing his head into the side of a lift.

Was this because the pressure of the case was getting to him, or was he terrified that Arnott and co are getting closer to uncovering his real identity?

What’s beneath the floor at the OCG workshop?

After Kate was released from custody, she got right back to work.

Joining her at the OCG weapons workshop was Steve (“Alright mate?”, “Yeah, you alright mate?”), and together they ordered diggers to come and find out what was beneath the workshop floor.

Could whatever is under the concrete be of significance to the OCG conspiracy and help to reveal the identity of ‘H’?