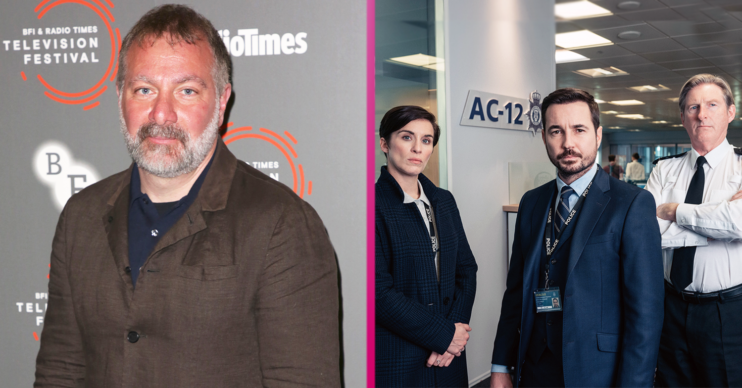 If production has to halt, we know "who to blame"

Line Of Duty creator Jed Mercurio has hit out at British Airways, telling his followers: “If we have to shut down again, you know who to blame.”

Mercurio revealed he was on a flight to Belfast to self-isolate before filming resumed on the hit BBC show.

And, during the flight, Mercurio took exception to two passengers in the row behind him who weren’t wearing masks.

Why was Jed Mercurio so angry?

Unless exempt, everyone on board a British Airways flight should wear a mask.

However, Mercurio claimed that no one had asked the passengers if they were exempt – either at the gate or while boarding.

And, he said, this put the Line Of Duty cast in danger.

Read more: This Morning’s Alison Hammond gets her own TV show

He tweeted: “So I’m on a @British_Airways flight to Belfast to self-isolate before resuming filming of #LineOfDuty and the two passengers in the row behind aren’t wearing masks and the flight attendant won’t challenge them. If we have to shut down again, you know who to blame.”

Clearly not satisfied that he’d got his rant out of his system, Jed continued.

If we have to shut down again, you know who to blame.

“Some comments re medical exemption. BA staff were unaware if these passengers were exempt because none had asked at the gate or during boarding. The flight attendant advised that, since BA don’t require proof, they don’t challenge non-compliance as anyone can claim exemption,” he tweeted.

British Airways replied to Jed’s tweet, but he didn’t appear to be happy with the company’s answer.

BA said: “We require you to wear a face mask on board at all times. However, the UK government has provided a list of exemptions and we would not require these passengers to wear one.”

Jed retweeted the comment and said: “Crew were unaware if the passengers were exempt and were reluctant to challenge them, citing that the passengers could claim they are exempt without having to provide proof. I would hope for a more robust system of challenging non-compliance.”

The Line Of Duty creator still wasn’t done, though.

Although it was clearly a scene from the show, Jed sarcastically said his actors were simply wearing the outfits as they queued to board the plane.

He said: “As @British_Airways won’t protect #LineofDuty cast from non-mask-wearing passengers, here’s @martin_compston and @Vicky_McClure in the queue for check-in.”

In happier Line Of Duty news, however, the show’s hunky leading man did reveal he’d finally got his hands on a script for episode five.

It’s been a long few months to linger on that ep4 bombshell, I can tell you it was worth the wait @Jed_mercurio 🙌 pic.twitter.com/RmHMTJRYyh

Martin teased fans it had been “worth the wait”.

Line Of Duty is set to return to BBC later this year, COVID-19 permitting.

Head to our Facebook page @EntertainmentDailyFix and tell us what you think of Jed’s rant.