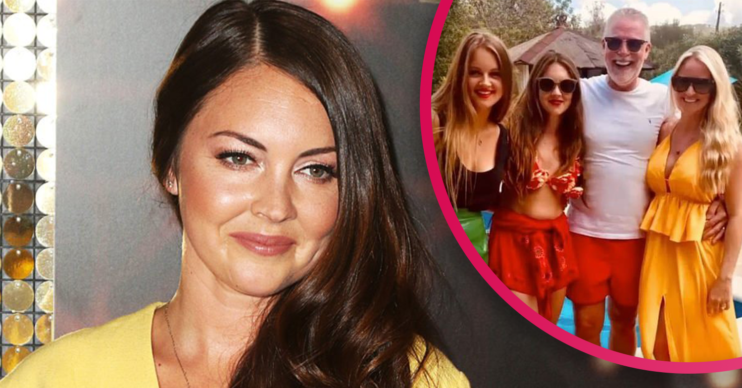 Lily, Daisy and Lacey are seen posing with dad Les

Lacey Turner has shared a rare photo of herself with her famous sisters.

The EastEnders star posted the family photo to her Instagram Stories.

Lacey, 33, is seen smiling in a red bikini top and sarong in the snap.

Her sisters Lily and Daisy are also both seen beaming as the girls enjoyed what appears to be a throwback pool day with their dad Les.

Who are Lacey Turner’s famous sisters?

Soap fans will recognise Daisy, 31, from her role in Hollyoaks.

She starred as villain Rebecca Massey/Jenny Houston for nine months in 2011 before being brutally killed by Silas Blisset.

She is seen wearing a yellow sundress in the photo.

The budding star auditioned for the role under a different surname to her sister and producer at the time, Brian Kirkwood, admitted he had no clue who she was.

What else has been happening with Lacey recently?

The actress is currently on a break from her EastEnders role as Stacey Slater after becoming a mum for the second time.

She previously took a hiatus when she gave birth to the couple’s first child, daughter Dusty, in July 2019.

Stacey was last seen on our screens being sent to prison after former bestie Ruby Allen set her up.

The fan-favourite character was accused of pushing Ruby down the stairs in an argument, causing her to lose her unborn baby.

Fans of the long-running BBC soap saw Ruby destroy CCTV evidence and send her to prison despite pleas from dying mum Jean Slater.

When will Stacey be back on our screens?

While there is no concrete date for Stacey to make her comeback, we do know she will be back.

The mouthy resident of No 31 was sentenced to a year behind bars back in April.

At the time, Lacey hinted it wouldn’t be long before she is back causing chaos.

She posted a short clip of her exit scene to Instagram and wrote: “Later Stacey Slater, see you sometime soon.”

Let us know what you think by heading to our Facebook page @EntertainmentDailyFix and leaving a comment.