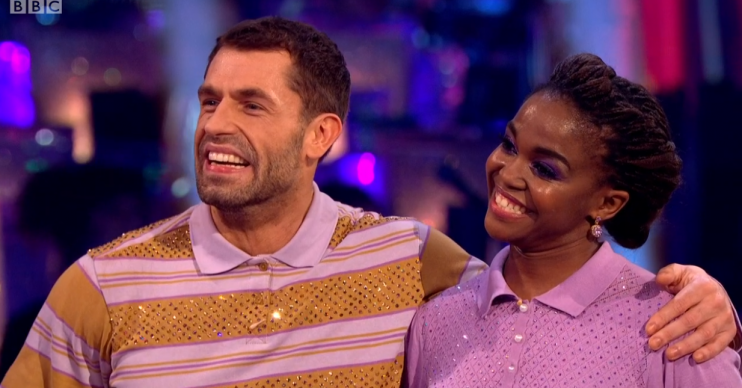 Kevin Fletcher clears up rumours over romance with Oti Mabuse

They have a great friendship.

Kelvin Fletcher says he and his Strictly Come Dancing partner Oti Mabuse are “like brother and sister” following romance rumours.

The star and his pro partner – who is married to fellow dancer Marius Impure – has dismissed speculation about his relationship after he skipped his fourth wedding anniversary with wife Liz Marsland to attend rehearsals for the BBC Latin and ballroom competition.

Kelvin, 35, played down rumours as he told the Daily Star newspaper: “We’ve got a great friendship, sometimes like brother and sister.”

The pair’s late night rehearsals for Saturday’s (30.11.19) quarter-final paid off as they scored a near-perfect 39 for their Beauty and the Beast-themed routine.

However, it was children’s TV presenter Karim Zeroual and partner Amy Dowden who received the first perfect 40 of the current series, while former footballer Alex Scott was eliminated from the competition after losing in the dreaded dance off to comedian Chris Ramsay.

What a night! Musicals week is just THE BEST! I thought everybody’s dance was brilliant and it still felt like any one of us could sadly be going home…… but we were saved! Absolutely blown away by the support. Thank you so much ❤️ @otimabuse we are through to the semi finals! Can you believe it?!!!!! 🤪☺️

Despite her disappointment, Alex insisted she loved her Strictly experience.

She shared on the show: “I’ve been a fan of Strictly forever so to even be here and dance here every week…

“I’ve loved every moment and I have to thank everyone, and everyone behind the scenes to make this show work.”

‘Don’t cry because it’s over.. Smile because it happend! 😊 I have had the most amazing 11weeks on a show that I have always loved. I truly have had an amazing strictly ‘journey’ and I wouldn’t change any of it. I just want to Say Thank you to everyone that supported us, sent messages,voted or even spoke about us with a smile. Your support has been EVERYTHING..#teamred I came onto the show because it was a dream of mine but knowing the importance of using the platform I am lucky enough to have to inspire others.. I gave you the real me.. The shy, scared to make a mistake, the real emotions, you saw me grow in confidence and a smile that showed you that I was loving it all..Don’t try to fit in and be something you are not.. just always be you.. It’s not always about the end destination it’s about what you do along the way..and I feel complete and so so happy. Thank you @bbcstrictly for having me.. it’s been real 💕 @mr_njonesofficial your special post is pending ☺️

Read More: Craig Revel Horwood signs up to stay with Strictly Come Dancing for another year

Meanwhile, professional dancer Anton du Beke who keeping his eyes on the prize as he makes it through to the semi-finals with his celebrity dance partner, Emma Barton.

Anton tweeted: “SEMIFINALS here we come!! Huge congratulations to my incredible partner @EmmaBarton for such an amazing performance…

“And huge thanks to everyone who voted for us! That Glitterball’s another week closer, my loves – just phenomenal!! (sic)”