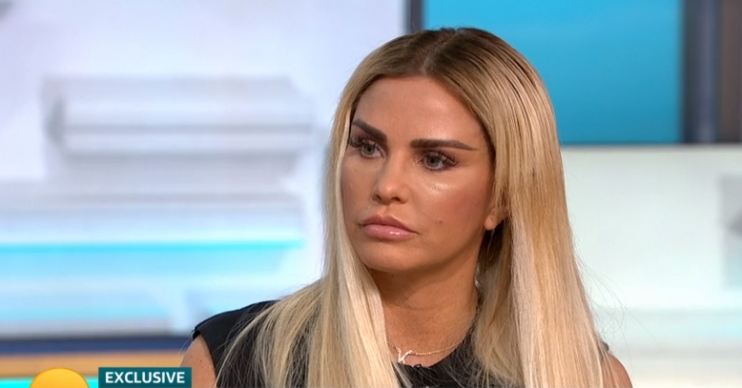 She had the surgeries done in Turkey

Katie Price has revealed she had her own fat injected into her bum and face as she showed off the results from her latest face lift on Good Morning Britain today.

The mum-of-five, 40, jetted off to Turkey to have a face lift, liposuction and a bum lift last month.

Appearing on Wednesday’s edition of the daytime show, Katie opened up about her surgeries to hosts Piers Morgan and Susanna Reid.

Katie admitted her recent surgery had left her looking like a “space invader” as her face was still swollen from the procedure.

She said: “Recently, 10 days ago, I had liposuction from here up to here [from knees to my waist], all the way up my back.

“I had my own fat put in my bum, you can call it a Brazilian bum lift but I haven’t had implants and I haven’t gone that big.”

Speaking about the procedures she’s had done to her face, Katie continued: “The face where I look like a space invader, because it’s still really swollen. I do look a bit different.

“As you get older, you do get wrinkles under here. I had my own fat out under there… and then at the side I just had it lifted… it’s safer than putting chemical stuff in.”

Katie said she believes she’s “calmed it down” with the amount of surgery she’s had since her younger days.

She added: “I think I’ve calmed it down. If you look back at pictures, I think it’s the ‘Dwight days’, I looked like a duck, I had my lips done. I think I looked horrific then.”

Piers was quick to grill Katie on why she wants to look younger and showed her a picture of herself in her twenties.

Katie’s mum Amy then joined her on the show via a video call from Spain.

She told her daughter: “Hello daughter, you look a bit better to me today than when we went to Parliament [four days after surgery].”

Asked if she had ever had any operations to look younger, Amy added: “[I] had a bit of Botox and fillers and that but as you get older you realise you don’t need it as such.

“I’ve realised that since I haven’t been well, you have to embrace what you are like yourself and be happy with yourself.”

Read more: Katie Price jokes she ‘fears her ears will fall off’

She added: “She gives me a little hint and I go ‘don’t you dare go and have anything done. You don’t need it , you are beautiful the way you are.'”

After Katie showed off the results of her procedures on social media, cruel trolls claimed she ‘looked like Jocelyn Wildenstein’.

The former glamour model is also said to be on sex ban as part of her recovery and has to keep her compression underwear on for the next six weeks to aid the healing process.

What do you think of Katie’s surgeries? Leave us a comment on our Facebook page @EntertainmentDailyFix and let us know.