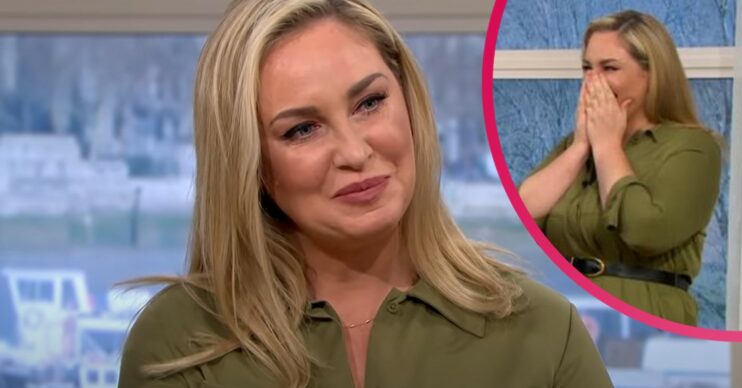 Josie Gibson couldn’t hold back her joy after she received a special message on This Morning.

Josie has been filling in while Holly Willoughby isolates at home with Covid-19.

Last week, Josie confessed to viewers that she has a crush on a certain Coronation Street actor.

She compared ITV star Michael Le Vell, who has played mechanic Kevin Webster since 1983, to a “glass of red wine that gets better with age”.

As a special gift to Josie, Phillip teased that he had a surprise for her.

He revealed that unbeknownst to Josie, Michael had been in touch to share a message with Josie.

Josie Gibson gets a special gift on This Morning

“She doesn’t know anything about this, he’s actually been in touch,” said Phillip.

Josie gasped and replied: “He’s not here is he?”

A video message from Michael then appeared on screen, to Josie’s shock.

“Hi, Josie. It’s Michael Le Vell. I saw your little ‘fine wine’ comment on This Morning the other day. Someone sent it me, and you know what?” he said.

“Every now and again in the pub, I just play it to the lads to wind them up. But thanks a lot for that! And maybe one day we’ll meet up in person in the studio! Thanks again and have a wonderful day.”

Josie became giddy and slightly flustered as she gushed over Michael.

Josie said: “Oh, he’s so handsome! He’s so handsome! Yeah, he’s lovely. Thanks for that! I didn’t know anything about that! Wow, that was amazing. Um, yeah. He’s definitely a fine red wine, isn’t he?”