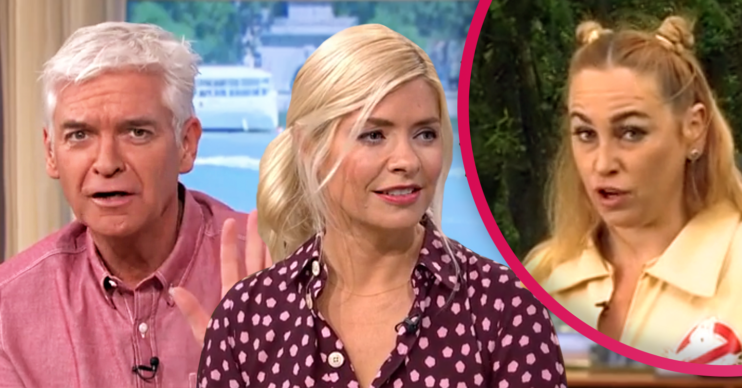 Josie Gibson splits her jumpsuit on This Morning

Her ghostbusting segment got a bit awkward

Josie Gibson split her trousers on This Morning today during a somewhat chaotic ghostbusting segment.

Host Phillip Schofield called it when he said: “This is the most bizarre start to a show ever!”

Josie was live from Somerset trying to hunt down the foul-mouthed ghost who has been reportedly verbally abusing locals.

What happened to Josie Gibson on This Morning?

She dressed the part, donning her very own Ghostbusters outfit – but it was a little bit tight and that led to a bit of a problem…

Holly Willoughby pointed it out asking: “Just from an outfit point of view, you’ve got a little split there… Was that some overzealous ghostbusting maybe?”

Josie covered the huge split at the front of her jumpsuit and explained herself.

“What happened, I was filling up the car in the petrol station and I had an accident and it was a bit tight…

As Holly agreed, Phil cut in: “Hold on, hold on, you filled up the car dressed like that?!”

There was then a very awkward, long silence while Josie just stared at the camera.

Realising she wasn’t going to speak, Holly stepped in: “I think she did!”

Phillip said: “This is the most bizarre start to a show ever.”

Viewers at home said they were ‘dying’ over the ‘awkward’ segment, but the consensus was clear: they love ‘relatable’ Josie.

This is well awkward. I love Josie #ThisMorning 😂😂

I’m dying at Josie on #ThisMorning

Josie Gibson’s having a total nightmare of a morning #ThisMorning

Oh my days josie gibson.
So relatable. I love her.
1.Messes up the planned joke
2. Hides behind a tree for a uncomfortably long time
3, rips the entire crotch out her costume on tv.
She is 2020 bridget jones #thismorning @thismorning @Schofe @hollywills

The segment hadn’t started well even before Josie’s wardrobe malfunction was revealed as she was supposed to be out of sight when they cut to her.

Instead, she appeared in the middle of the shot for everyone to see.

She didn’t say anything, just quickly darted behind a tree.

Phil said: “She’s wrecked that!” he then added: “You can come out!” while they descended into fits of giggles.

Josie later interviewed a couple who claimed they’d seen the ghost and recorded it being rude to them.

However, they then revealed they no longer had the recording, leaving Phil, and viewers at home decidedly suspicious.