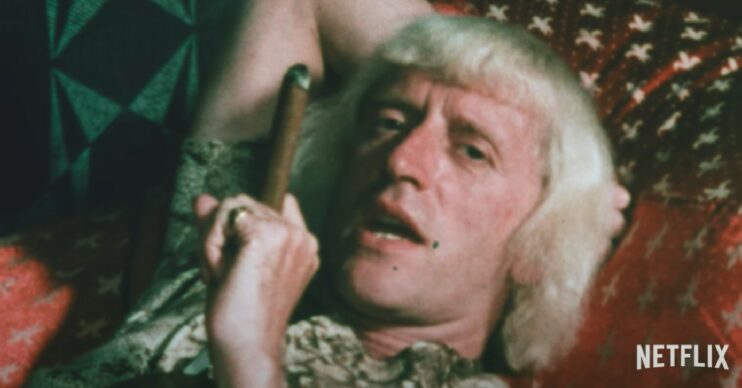 The docu-series charts how disgraced Savile came to be revealed as a horrific peadophile and sex abuser, after his death.

Savile committed hundreds of sexual offences between 1955 and 2009 – mostly against children.

Who was Jimmy Savile?

Jimmy Savile was a British TV and radio personality – hugely popular with viewers and high society alike. Netflix dropped a new docuseries about him this week.

He was seen as a national treasure until after his death in 2011.

After his death it emerged that Savile was a prolific and long-term peadophile and sex offender.

He’d been getting away with it for decades.

Why was Jimmy Savile buried standing up?

Savile died at home at the age of 84.

His funeral directors granted his wish to be buried at a 45 degree angle, overlooking the sea in Scarborough.

Scarborough council also agreed to allow Savile to be buried feet first, instead of the usual horizontal position.

That’s not all though, his coffin was made of gold. It was later encased in concrete.

He famously had a triple headstone that marked his final resting place.

But since his crimes were uncovered, the headstone has been removed and destroyed.

Where is Savile buried?

The fallen star had his funeral and was buried in Scarborough, where he lived.

Following the discoveries about him, his family had his headstone removed.

They then discarded it in landfill.

A celebratory plaque on his flat was also removed.

Savile’s gold coffin was encased in concrete so it could never be opened again.

Why was Jimmy Savile never prosecuted?

Quite how Savile got away with his horrendous crimes for so long is still something that can’t fully be explained.

It seems to be a mixture of a cover-up and people ‘turning a blind eye’ to him, plus his victims being so vulnerable, it was easy to discredit them.

The earliest incident recorded by police took place in 1955 in Manchester where Savile managed a dance hall.

Abuse is recorded in 1965 at Stoke Mandeville hospital and Leeds General Infirmary, where Savile volunteered. This is a year after he first presented Top of the Pops.

In the 1970s, Savile was accused of abusing girls at a school in Staines, Surrey.

Rumours began to circulate about him being a peadophile in the 1980s.

In a 2000 documentary with Savile, Louis Theroux asked him about the rumours but Savile strenuously denied them.

In 2009 Savile was interviewed under caution about an alleged sexual assault at a school. The Crown Prosecution Service (CPS) said there wasn’t enough evidence to take further action.

Journalist Marjorie Wallace speaks on the Netflix documentary about how she was a regular visitor to Broadmoor hospital. She went sic to eight times a year to visit to highly disturbed twins.

She talks about the one occasion she met Savile and how he jumped onto a table where she was sitting with the twins and said: “I’ll have you first. I’ll have you second.”

Savile was a governor of Broadmoor at the time and is described as having ‘full run’ of the place.

Wallace says she got in touch with the Department of Health about her concerns, but didn’t get anywhere.

“He was too important,” she says.

Savile was friends with important people such as Prince Charles and Princess Diana. Despite rumours, newspapers were silenced, again due to an apparent lack of evidence.

Savile was found dead at his home in October 2011.

It was just days before his 85th birthday.

He’d previously been in hospital with pneumonia and his death wasn’t suspicious.

He died before his prolific sexual abuse became public knowledge and, after his death, his closed gold coffin was displayed at the Queen’s Hotel in Leeds.

It was on show alongside one of his trademark cigars and two This Is Your Life books.

Did Jimmy Savile have a daughter?

In 2015, a then 29-year-old-woman came forward, fearing she could be Savile’s biological daughter.

She claimed the monster had abused her mother, Christina Martin, from the ages of 13 to 16.

The woman, Georgina, said that Christine had been lured by Savile at a rail station and the abuse continued until she told him she was pregnant when she was 16.

The daughter told the Sunday Mirror: “I want to know the truth, but I hope to God I was not fathered by that man.

“It would be the worst nightmare imaginable to find out Jimmy Savile was my dad.”

Georgina has not spoken out about the results of DNA testing publicly.

She told The People: “The truth will come out when I’m ready. A lot of stuff that has been said about me has been wrong and put me under massive stress.”

Why was Jimmy Savile knighted?

In 1990 Savile was knighted by the Queen for his services to charity.

Since being exposed as raping and sexually assaulting hundreds of women and children, his knighthood has been removed.

A Cabinet Office spokesperson did however point out in 2012 that there was no knighthood to revoke.

He said: “It’s a living order and then you cease to be a member when you die.

“There isn’t an honour to revoke.”

Savile was also given an OBE in 1971 for his contributions to the country.

Did he have a wife?

He often played up to the stereotype of a ‘playboy DJ’ but was never spotted with women or known to be dating anyone.

He also had a strange fixation on his mother who he called The Duchess.

Savile admitted to sitting with her dead body for days after she passed away.

There were two police investigations into him during his lifetime, one in 1958 and another in 2009.

In October 2012, ITV aired Exposure: The Other Side of Jimmy Savile which documented his crimes.

Following this, the Met launched an investigation into the accusations and confirmed that over 450 people had come forward by January 2013.

There have also been many accusations that Savile was a necrophiliac who performed sexual acts on the deceased.

Before this a Newsnight special looking into accusations against Savile was pulled by the BBC in favour of a tribute.

Have you been watching Jimmy Savile: A British Horror Story on Netflix? Leave us a comment on our Facebook page @EntertainmentDailyFix.