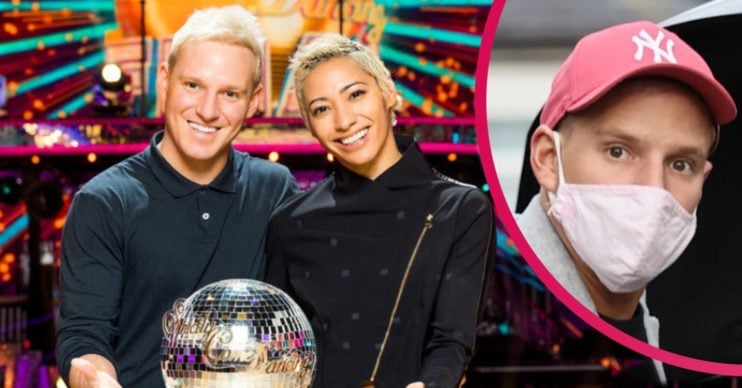 They've made it to the Strictly final!

Jamie Laing has hit back at claims the Strictly Come Dancing judges have been too lenient towards him.

The former Made In Chelsea star, 32, has been in four dance-offs with his Strictly pro partner Karen Hauer, 38.

And last week in particular dozens of upset Strictly viewers took to Twitter after Ranvir Singh was sent home instead of Jamie.

But they’ve still managed to make it through to tonight’s Strictly Come Dancing final.

Speaking to Entertainment Daily and a host of other news outlets at a BBC Strictly final press event, both Jamie and Karen responded to claims the judges have been overly forgiving towards them.

Jamie laughed off the criticism and joked: “I think some people think we are bribing them! It has got to that point.”

Meanwhile, Karen argued the judges had been put in a “tough position”.

I think some people think we are bribing them! It has got to that point.

She added: “I have to bow down to the judges. It is up to them. Especially head judge Shirley [Ballas] who had to make this hard decision. You know what, it is hard but it’s the nature of it.”

Second time around for Jamie

Jamie continued: “With Karen and I, we have been those people. Some people want us to stay – some people don’t. So I think it is a tough one for the judges as well… It is really hard!”

Jamie was all set to compete in 2019’s Strictly, but was forced off the show after he injured his foot during initial trainings.

The reality star was then replaced by former Emmerdale actor Kelvin Fletcher, who went on to win the show.

Fortunately Jamie sees the bright side, as he’s not only returned this year, but he’s made it to the final four.

Jamie said: “I said this before but I do think everything happens for a reason. It’s been a real long journey and a really great one.

“So I think it is meant to be 100%. And I couldn’t be happier with Goose [Karen]. We just have the best time. Unbelievable, incredible.”

Karen agreed: “I’ve never seen anyone bounce back with such positivity and resilience.

“Being given a second chance on Strictly is amazing. I’ve made a friend and I’ve made a machine now – he’s got awesome abs!”

The Strictly Come Dancing final airs on Saturday at 6pm on BBC One.